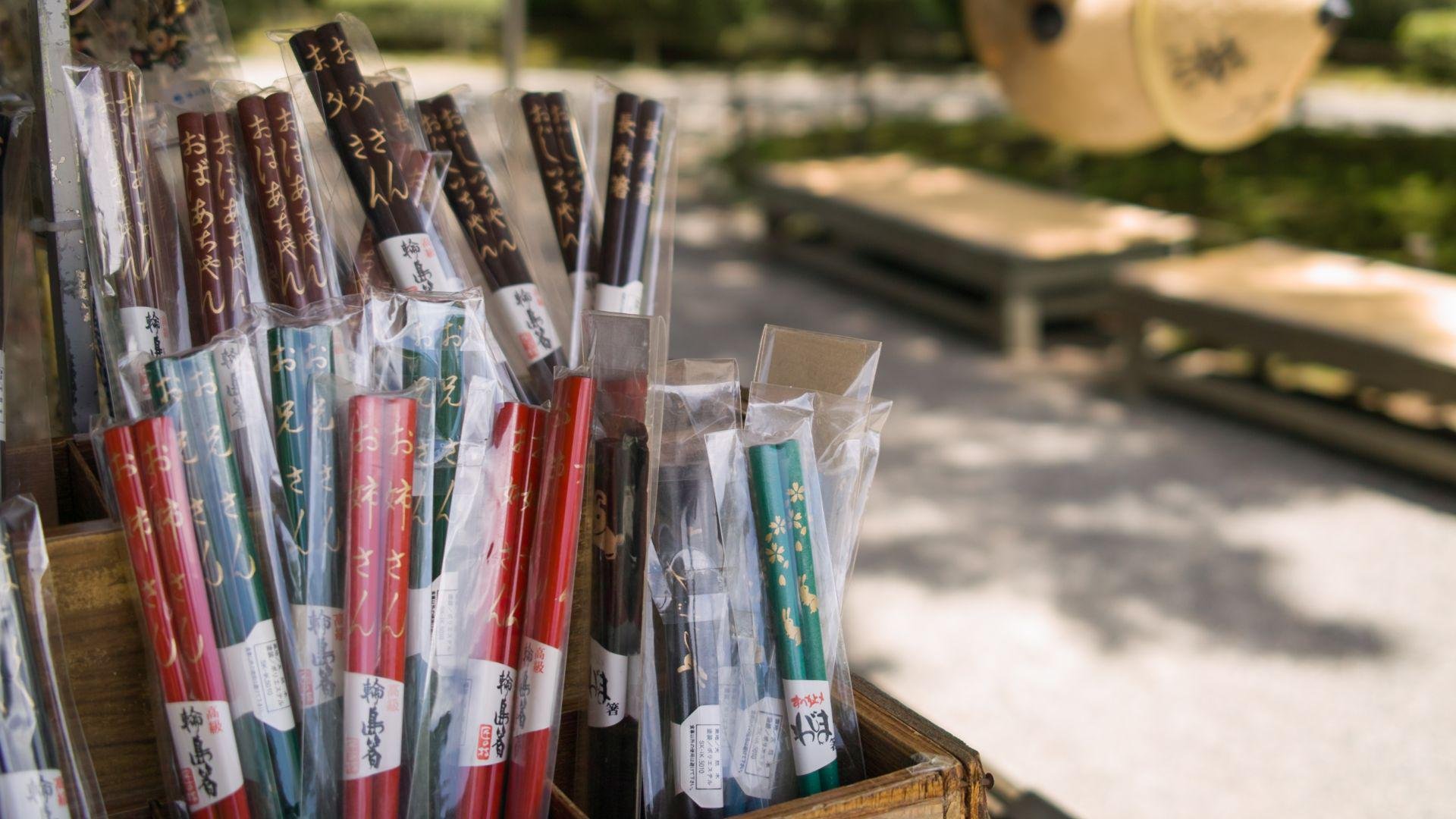 Everything You Need to Know About Japanese Chopsticks

Chopsticks are a key part of the Japanese dining experience. Almost all traditional dishes are eaten using these utensils, from delicate bites of sushi to steaming bowls of ramen. Japanese chopsticks come in all sorts of different styles, from mass-produced disposable pairs to colorful souvenirs and high quality chopsticks hand-crafted by expert artisans.

The thought of tucking into a meal using two straight sticks can be intimidating to the uninitiated, so this post is here to help! We’re going to go over everything you need to know about Japanese chopsticks, from how to eat with chopsticks to chopstick etiquette in Japan. 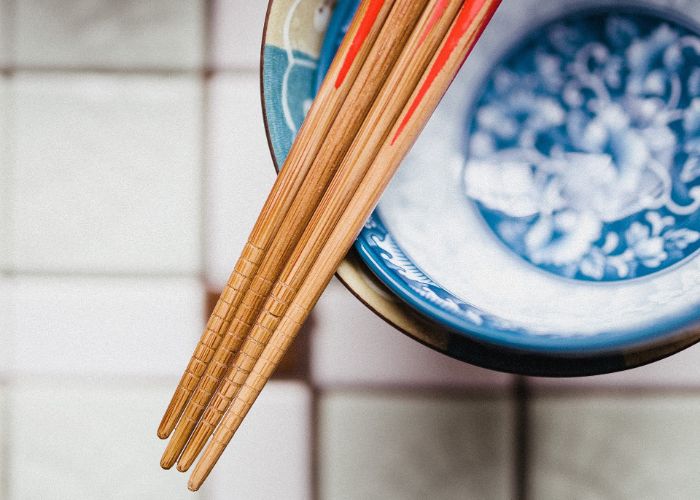 An introduction to Japanese chopsticks

Chopsticks originated in China, then spread to Japan around the sixth century AD. These early versions of the utensils were bamboo chopsticks joined together at the top (either with a chain or like tweezers), which gradually developed into the forms we use today.

Getting linguistic for a moment, let’s turn to the question of what are Japanese chopsticks called? The word ‘chopsticks’ is believed to derive from Chinese Pidgin English, but in Japan they're known as ‘hashi’ – written using the kanji 箸 – or ‘ohashi’ if you want to be extra polite. They are sometimes also called ‘otemoto’, although this term is not as frequently used. 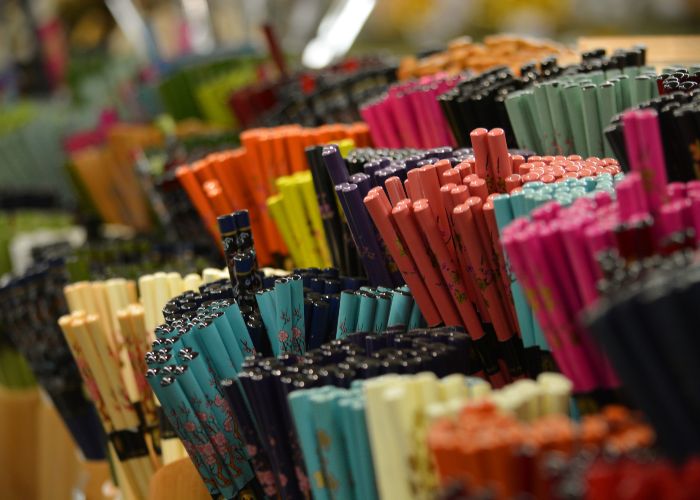 In terms of the materials they’re made of, wooden and bamboo chopsticks are the most common styles in Japan. They’re often lacquered to make them more durable and aesthetically pleasing, and you can buy Japanese chopsticks adorned with all sorts of beautiful designs. In addition, you can get metal chopsticks, chopsticks made from plastic, and even extravagant pairs crafted from high-end materials like jade. You can watch the chopstick-making process in the video below.

The material they’re made from is not the only factor that differentiates pairs of chopsticks. There are actually many varieties of Japanese chopsticks, each intended for a slightly different purpose. For example, if you’ve ever dined at a Japanese restaurant or izakaya, you might have come across plain, disposable wooden chopsticks that you need to split in two at the top before using. These are known as waribashi (割り箸) – combining the words for ‘split’ and ‘chopsticks’ – and were originally created using scrap wood left over from making sake barrels. The lack of varnish or lacquer gives them a rougher texture, meaning they’re a bit easier to use. 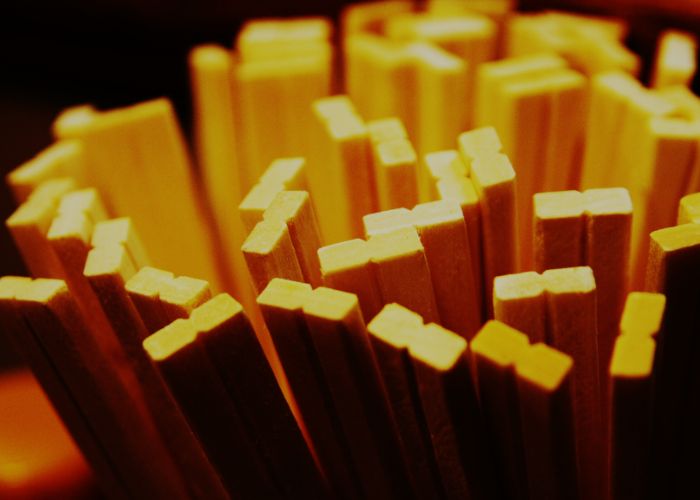 In recent times, the amount of waste generated by waribashi has led to an increase in the popularity of collapsible travel chopsticks. Referred to as pokebashi, a portmanteau of the words for pocket and chopsticks, these portable pairs come in handy compact cases and are also convenient options for picnics. 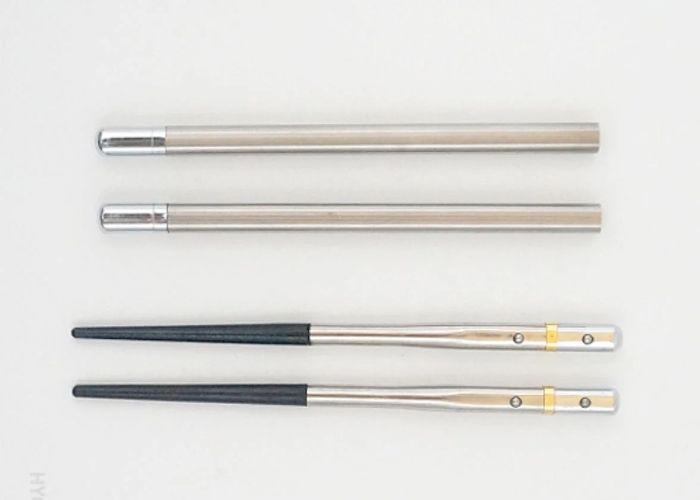 So that covers eating out, but what kind of chopsticks do the Japanese use at home? Generally speaking, people will have their own pair of chopsticks (or more than one!), rather than sharing them communally. Wooden and bamboo chopsticks are the most prevalent, which are usually between 21-24 centimeters long and coated with varnish or lacquer so that they last longer and look more stylish. Children normally use shorter chopsticks than adults, or special training pairs connected at the top.

Chopsticks are also given as presents in Japan. If you’ve been to the country you’ve probably seen them for sale in souvenir shops, but chopsticks are gifted on special occasions too. For instance, beautifully decorated meotobashi – or matching couples’ chopsticks – are a popular choice to give to newlyweds. 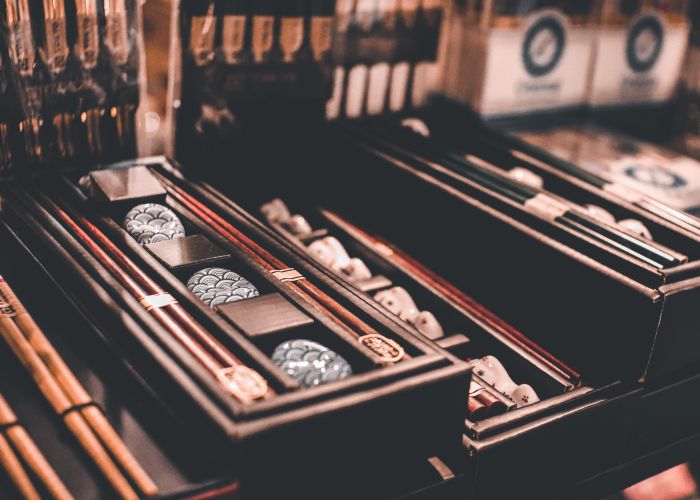 Japanese chopsticks are not just used for eating either. There are special cooking chopsticks known as saibashi (菜箸), which are exclusively used for preparing food. These are thicker and longer than regular hashi, at 30 centimeters long or more. Using saibashi enables chefs to handle hot food easily, without their hands getting near open flames. You can also get serving chopsticks called manabashi, which fall between saibashi and regular hashi in length (usually 18-30 centimeters), and are used to lay out food such as sashimi on plates ready to be served.

The difference between Japanese, Chinese, and Korean chopsticks 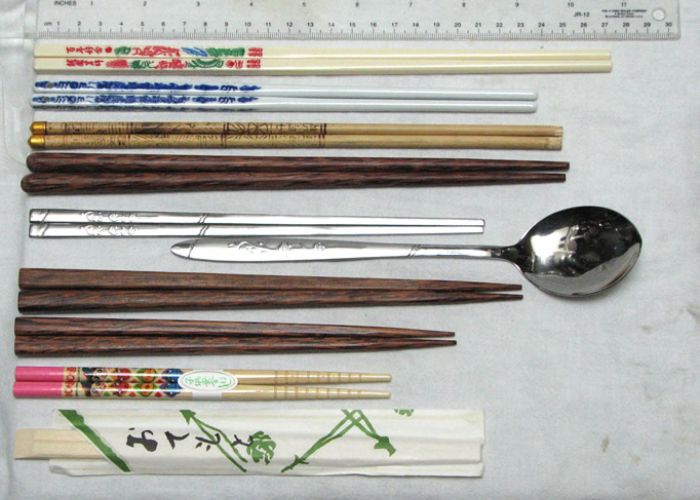 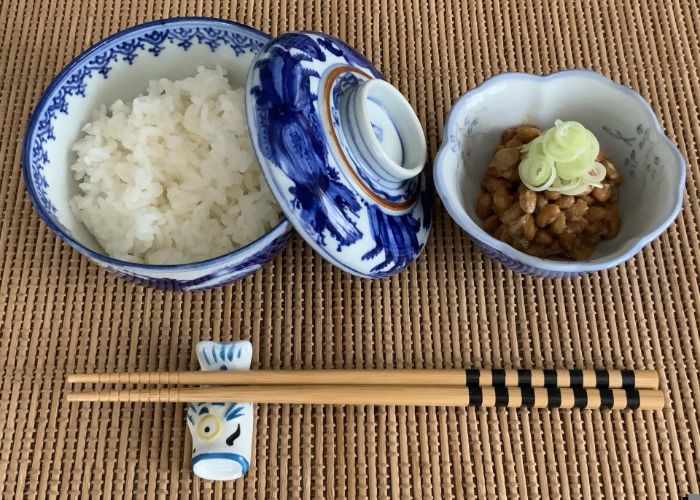 Japanese chopsticks are usually shorter than both Chinese and Korean chopsticks, and have more pointed ends (which sometimes have grooves to prevent food from slipping). This length perfectly suits the dining custom of picking up your bowl of rice or other small dishes and bringing them closer to your mouth as you eat.

How to hold chopsticks

If you’ve never eaten with chopsticks before, the prospect of doing so might seem a bit daunting. Don’t worry though, because while it may feel tricky at first, with a little practice you’re sure to pick up the skill! Here’s a quick guide to help you get started. 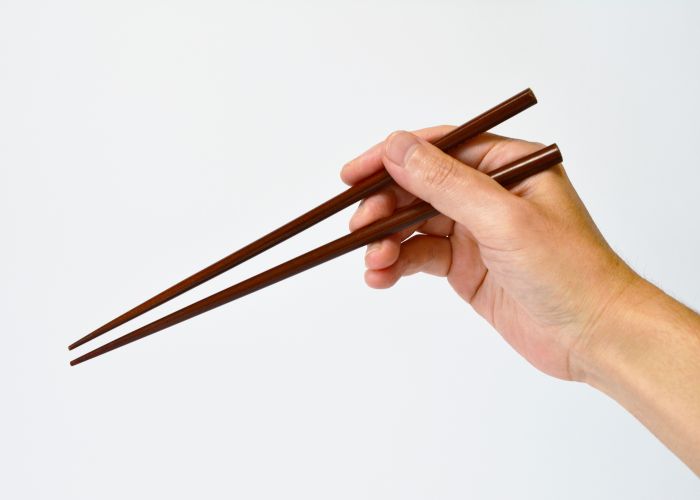 Let’s first look at how to hold chopsticks. Aim to hold them about one-third of the way down, not in the middle or close to the ends that pick up the food. Grip the top chopstick between your thumb, index finger and middle finger, in the same way you would hold a pencil. The bottom chopstick rests at the base of your thumb and index finger, and is supported by your ring finger. Only the tips of the two chopsticks will touch. 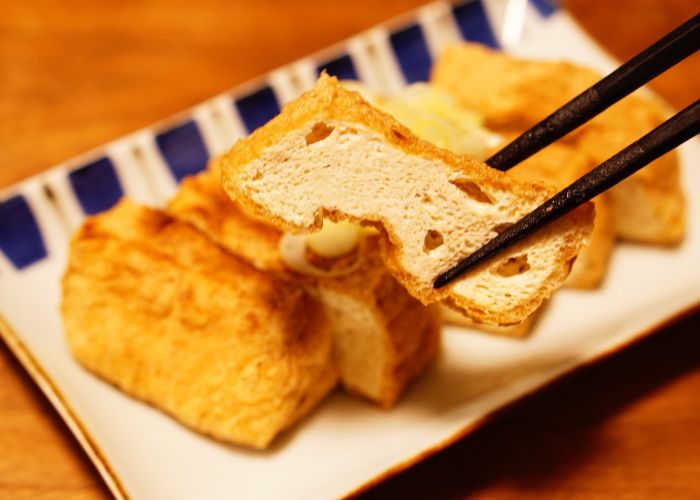 Once you’re comfortable with that, it’s time to move on to how to eat with chopsticks. The key point is that the bottom chopstick should remain still, while the top one moves up and down to pick up your food. Most of the movement will come from your index and middle fingers.

Getting the hang of using chopsticks might take a while, so start by trying to pick up big items (like a piece of sushi) and move on to smaller ones (like a single bean). Remember, if you’re really struggling at a restaurant, there’s no shame in asking for a fork!

In addition to knowing how to eat with chopsticks, there are some key Japanese dining etiquette points to follow when using them if you want to avoid making a cultural faux pas! The main things to remember are: 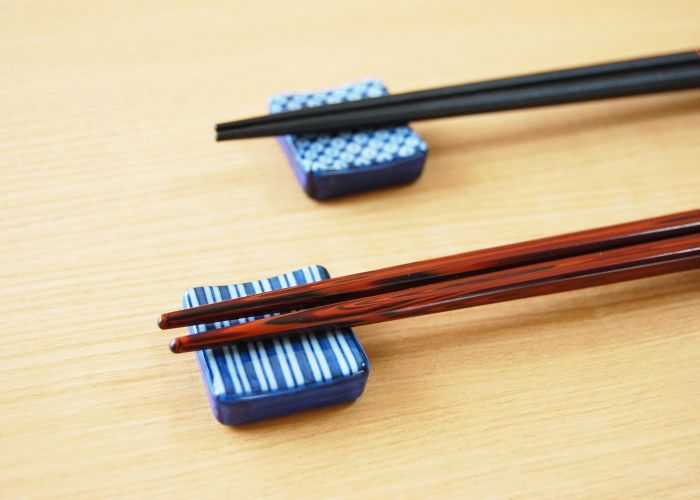 Being able to use chopsticks when eating in Japan, at a Japanese restaurant where you live, or at home is sure to make your dining experience more enjoyable. Brush up on your practical skills and etiquette knowledge, and you’ll soon be a chopstick master!

Author1 Beam
Lorem Ipsum
SEE ALL POSTS
Stay in the Loop!
We are always discovering the latest foodie trends.Sign up to receive insider tips about the food scene in Japan's most extraordinary areas.