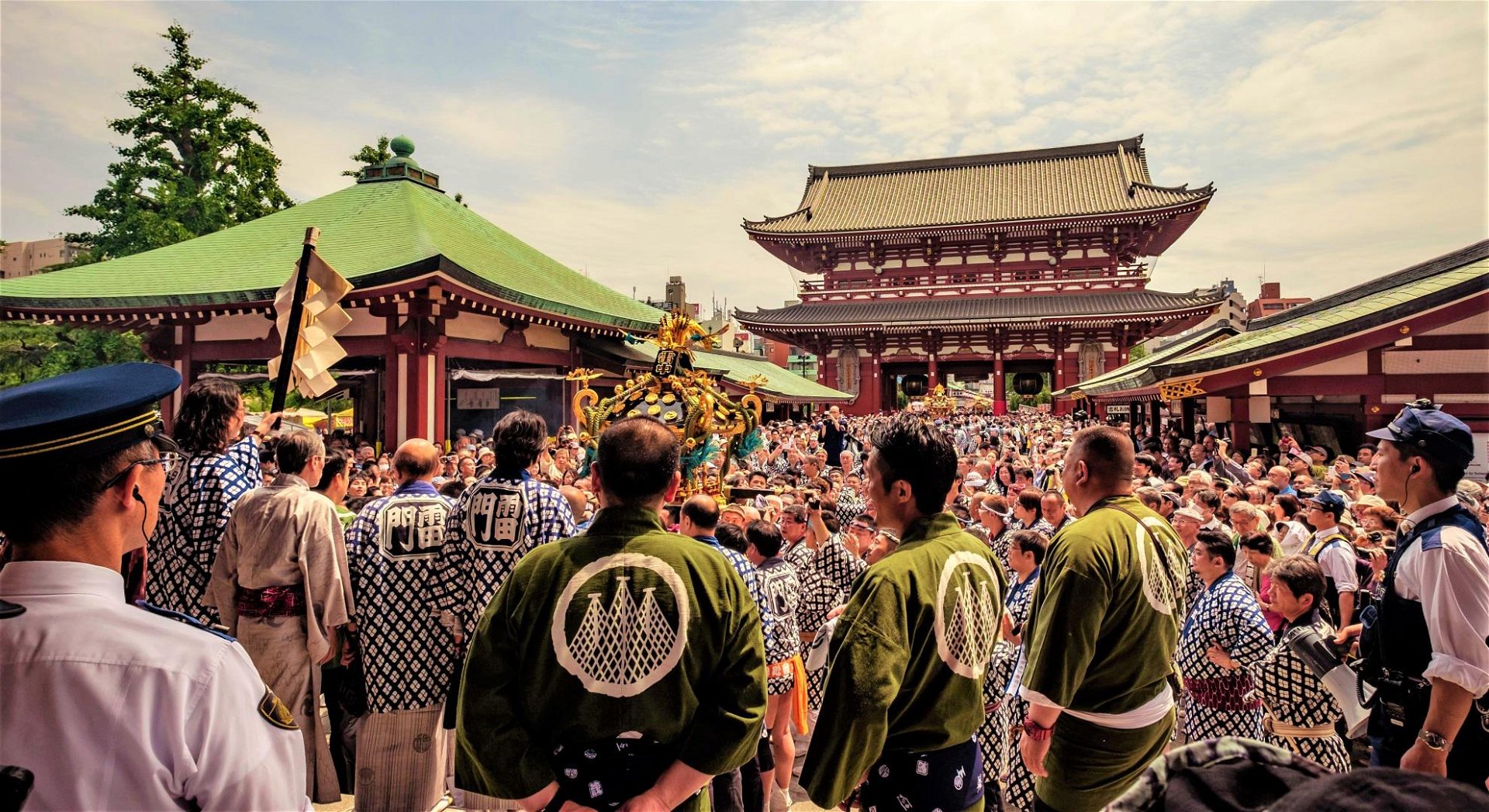 Guide to the Most Famous Japanese Festivals 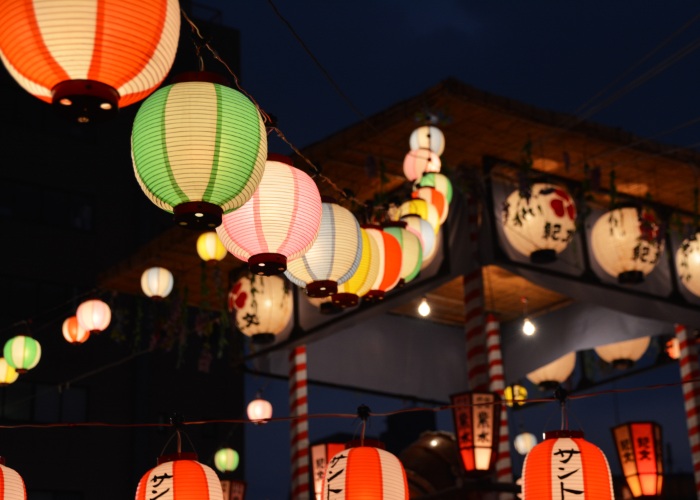 Most shrines throughout Japan will have at least one annual festival to celebrate their deity, meaning that there are countless events happening throughout the country every month. Varying in scale and extravagance, some matsuri even carry on for a few days. Parades tend to make up an important part of Japanese festivals, too, with lively chanting, dancing, and colorful traditional dress. Typically, the kami (god or deity) of a shrine is carried in a portable shrine or float called a mikoshi as part of the procession.

Apart from the atmosphere and the rituals of each festival, but equally part of the festivities, you'll often find a range of local specialties available at street food stalls called "yatai". "Tabe-aruki" (meaning "walking and eating") is a part of the celebration! You can browse a range of street food stalls and munch on takoyaki, okonomiyaki, a range of traditional wagashi sweets, and more. Immersing yourself in a Japanese festival is always an unforgettable experience for all the traditional culture, extravagant sights, and tasty Japanese street food! 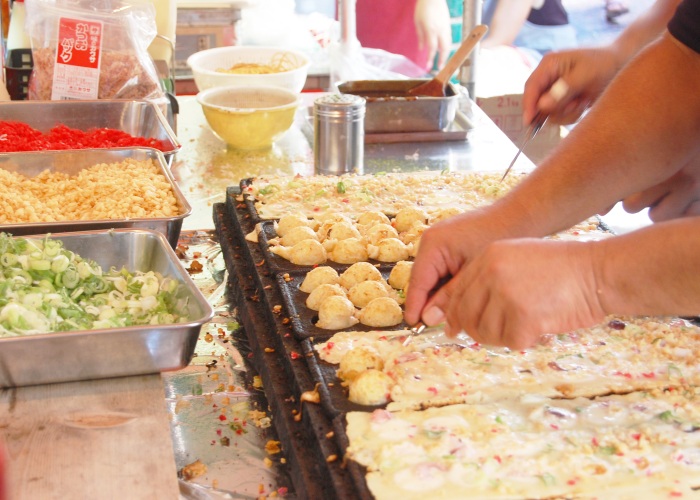 January 1, all of Japan

Much more of a significant time in Japan than Christmas, New Year is a big deal in Japan. From January 1 to January 3, Japanese New Year or Shogatsu is a time when businesses shut down, and people go home to spend time with their families. There are a lot of essential New Year's rituals and foods that you should try if you visit at the end of December, like toshigoshi soba noodles for longevity or traditional osechi ryori. You'll also see special New Year food and decorations everywhere in Japan like kagami mochi, and people will make their first visit to a temple or shrine during Shogatsu (this is known as 'hatsumode'). Meiji Shrine is a popular and busy hatsumode location in Tokyo at New Year. Note that shops are often closed during this period, with limitations on public transport. 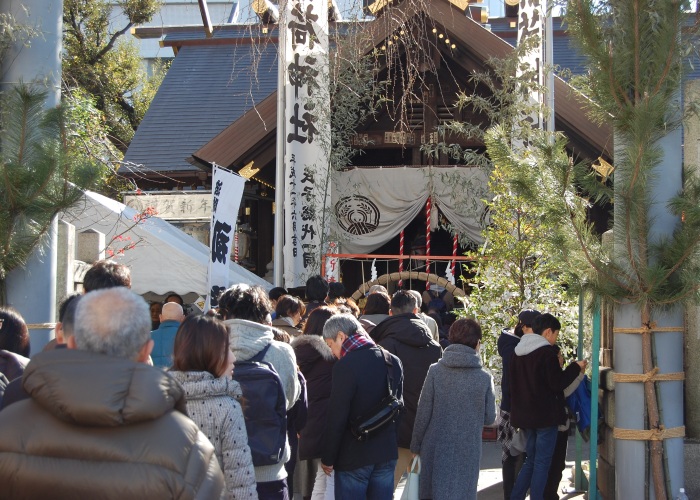 One week in early February

The Sapporo Yuki Matsuri in Hokkaido is one of Japan's biggest snow festivals! Meaning "snow festival", it's usually held for about a week in February, featuring spectacular ice sculptures, winter markets, illuminations, concerts, delicious warming local food, and Japanese beer from the Hokkaido region in the city's Odori Park. It's a popular event for local and international tourists with millions of tourists visiting the country's northernmost island to join one of Japan's most famous festivals. Make sure you try lamb yakiniku or butter miso ramen while you're in Hokkaido! 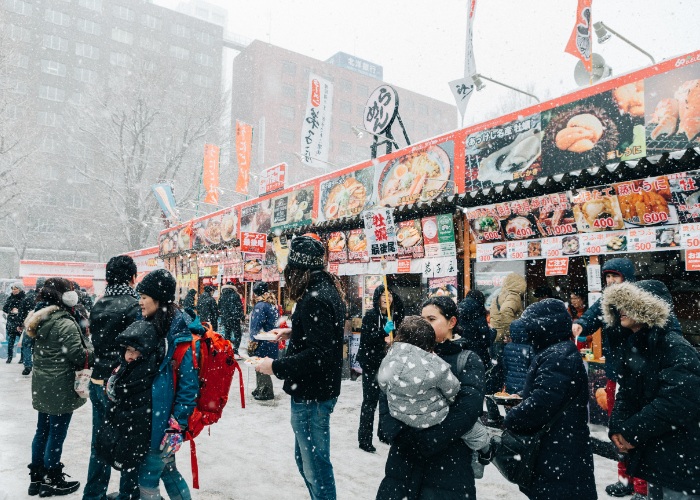 Omizutori is an important Buddhist event held in March each year at Todaiji Temple's Nigatsudo Hall. More than a festival, it's a religious ceremony that features the nightly burning of torches. Omizutori is a repentance ritual that has continued for over 1250 years. It's one of the oldest recurring Buddhist events in Japan. This Japanese festival looks spectacular for onlookers gazing up at the flames after sunset as the torches, up to 8 meters long, burn from the balconies of the hall.

Takayama is a small city located in the mountainous Gifu region in central Tohoku. Takayama Matsuri is the region's twice-yearly event, held in both spring and fall with processions through Takayama's old town district. Elaborate and lavishly decorated floats are pulled through the old town, highlighting the beautiful environment as one of the country's top 3 most beautiful Japanese festivals. The Spring Festival in April (which is also known as the Sanno Matsuri) celebrates the Takayama's Hie Shrine in the south, and the Autumn Festival in October celebrates the Hachiman Shrine in Takayama's north (also known as the Hachiman Matsuri).

Only on odd-numbered years on weekend closest to May 15

Known as one of the 3 greatest festivals in Japan, Tokyo's Kanda Matsuri is held over a week in May. It's one of the city's most famous events in the name of Kanda Myojin Shrine, but this Japanese festival is only celebrated in its fully-fledged form in odd-numbered years. It celebrates the deities of good harvest, fishermen, and a revered feudal lord of the 10th century. In even-numbered years, it's a much more simplified "shadow festival" affair. Aside from a number of events that run during the festival period, the massive parade through the center of Tokyo on Saturday (whichever is closest to May 15) is the highlight. You'll see plenty of mikoshi around this traditional festival, which has been running since the Edo Period. 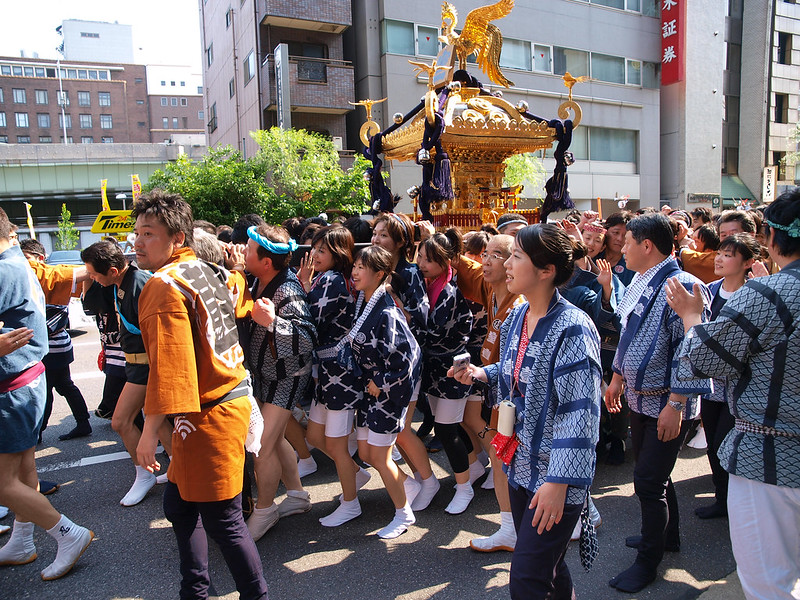 Taking over much of Kyoto for the month of July, Kyoto's Gion Masturi is centered around Yasaka Shrine. This matsuri takes over the historical Gion and Higashiyama districts for the whole month of July. This lavish Japanese festival is one of the city's largest events and is ranked in the top 3 festivals nationally. The grand procession with its extravagant floats (Yamaboko Junko) occurs on 17 July each year, with two types of enormous floats used (23 yama style floats and 10 hoko style floats). The evening events (yoiyama) throughout the month are also particularly spectacular and lively.

Ranked among the top 3 festivals in Japan, Osaka's Tenjin Matsuri has been running in Osaka since the 10th century. Taking place on July 24-25 each year, this Japanese festival honors the scholarship deity that reigns over Tenmangu Shrine with festival boats on the river! It's an opportunity to celebrate the deity by parading him around the city with festivities including parades, traditional costumes, and plenty of Kansai-style food for entertainment. The best of the festival events occur on the second day, with both an intricate land and river procession plus glorious fireworks. 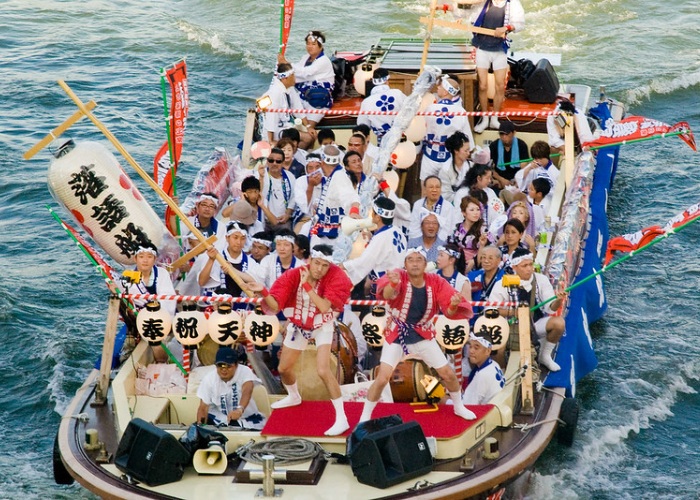 The Nebuta Matsuri is a summer festival that occurs in Aomori Prefecture. Two dozen floats built by local teams are adorned with enormous, colorful lanterns made from delicately painted washi paper. It makes for a spectacular Japanese festival as kamisama (gods), historical Japanese figures, and mythical creatures and even characters from popular Japanese culture are depicted on these amazing lanterns that take over the evening skies of Aomori City at the start of August each year. These human-powered floats also carry large taiko drums, dancers, and musicians, and are a true spectacle. 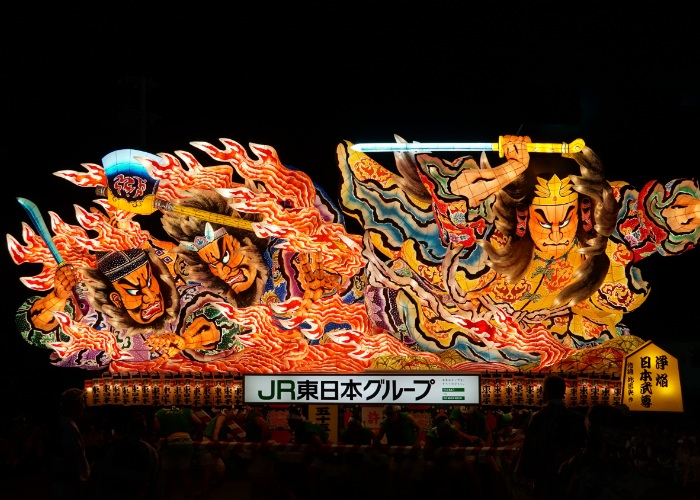 Tanaba is the "star festival" that's held across Japan, but Sendai's Downtown has the biggest festival with the most elaborate and colorful decorations spread across its shopping arcades. Tanabata is a Japanese festival that celebrates the 7th day of the 7th month when two special stars cross paths, according to Chinese legend. Using washi Japanese paper and bamboo, local shops, community groups and schools will handcraft large hanging streamers up to 5 meters long to drape over shotengai arcade walkways. They also add cranes, paper strips, kimono strips and more, and in the nearby parks they host stage performances like live music, light entertainment, traditional dance, and of course, street food vendors. 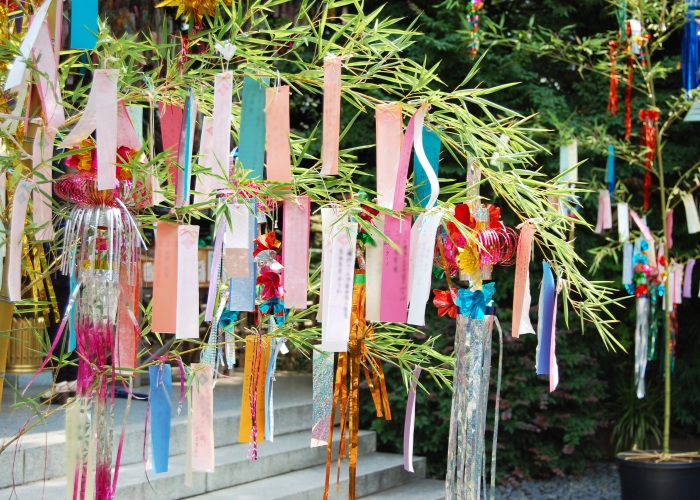 "Odori" in Japanese is the word for "dance", so the Tokushima Awa Odori festival is all about traditional dancing taking over the city. It's held during the evenings around the Obon season in mid-August, and sees streets blocked off to make way for thousands of dancers. Join as a veteran, amateur, or spectator as dancers flock to Tokushima to take part in the traditional "Fool's Dance". This dance originates from over 400 years ago, and spawned from the lyrics to a common dance song in Japanese. It goes, "Fools dance and fools watch, if both are fools, you might as well dance". Catchy, right?

An important day in the Japanese festival calendar, Obon is an annual event for Japanese Buddhists to commemorate their ancestors. It's believed that during Obon each year, the spirits of ancestors return to this world to visit their relatives. If you're traveling to Japan during this time around the middle of July and August, you'll see lanterns hung out the front of homes to help guide the ancestors' spirits. Floating water lanterns are also released into rivers, lakes and the ocean at the end of Obon to return the spirits back to their world. This Japanese festival also sees Obon dances performed, people visit the graves of loved ones, and they also make offerings of food. Obon is among Japan's 3 major holidays (the others being New Year and Golden Week). 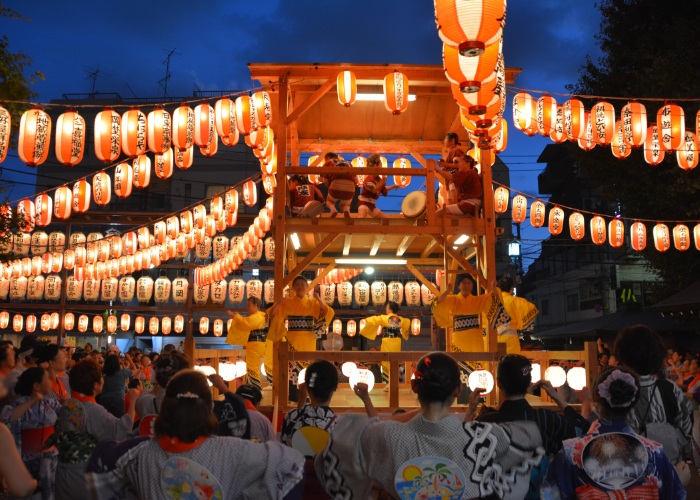 Jidai means "era" or "period" in Japanese, so Kyoto's Jidai Matsuri celebrates the different eras throughout the time in Japanese history that Kyoto was the capital city. In a vibrant parade of floats and people dressed in traditional outfits from throughout the ages, the long procession walks through the city from Kyoto Imperial Palace to Heian Shrine on October 22 each year. Find a spot along the route to settle into as you travel through time checking out fashions through the ages for a grand day out. 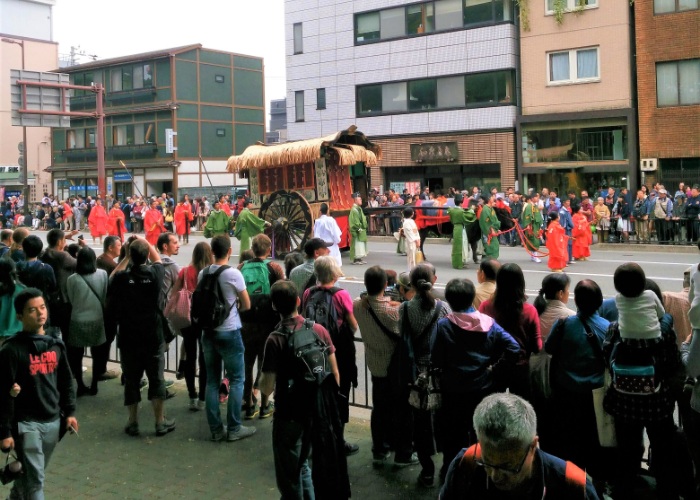 The Chichibu Yomatsuri is an extravagant night festival in Saitama Prefecture ('yo' meaning 'evening' and matsuri being festival) celebrating Chichibu Shrine. It's also known as Chichibu Night Festival. At this Japanese festival, large festival floats are lit up and ornately decorated with a range of lanterns, intricate tapestries, and glittering gilded wood carvings. The event is accompanied by the beating of large taiko drumming and music from the traditional Japanese flute, and a staggering 2 hour firework display. This evening Japanese festival is known for filling the local streets with festival food stands and amazake (sweet sake rice wine) to warm up festival goers during the winter. Don't miss out on the main festivities that happen on the night of December 3, it's only 90 minutes away from Tokyo by public transport.

There really are too many amazing Japanese festivals to choose a favorite! Honorable mentions for winter festivals include the Yokote Kamakura Festival in Akita in the middle of February during the snow season. Igloos called kamakura are built and you can sit inside them and eat grilled mochi rice cakes! Mini kamakura-like little snow houses are lit with candles, and it's amazing to see it all lit up.

The Akita Kanto Matsuri in early August is also an amazing festival where lanterns are attached to tall bamboo poles. In the evenings, members of the parade balance these massive lantern poles as they walk around in a spectacular display. There are several "fire twirling" festivals in winter in the north, which are interesting cultural immersion events. Sakura viewing festivals around Japan in spring are always a treat as well, the blossoms tend to travel up Japan as the weather gets warmer. 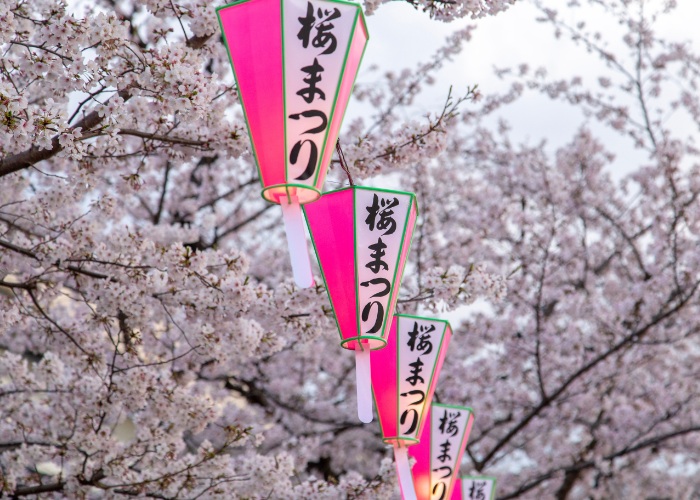 Celebrating different seasons, historical events, and the uniqueness of individual prefectures in Japan, Japanese festivals are one of the best ways to experience Japan. From fireworks to floats and from flowers to street food, you can fully immerse yourself in Japanese culture by attending a festival in Japan! Be sure to check out any festivals happening at the time of your trip to Japan; and for anyone visiting Tokyo read our comprehensive Tokyo matsuri guide. The Japanese Festival Calendar for 2022 is pretty busy so make sure to plan ahead to join a matsuri on your next trip to Japan.