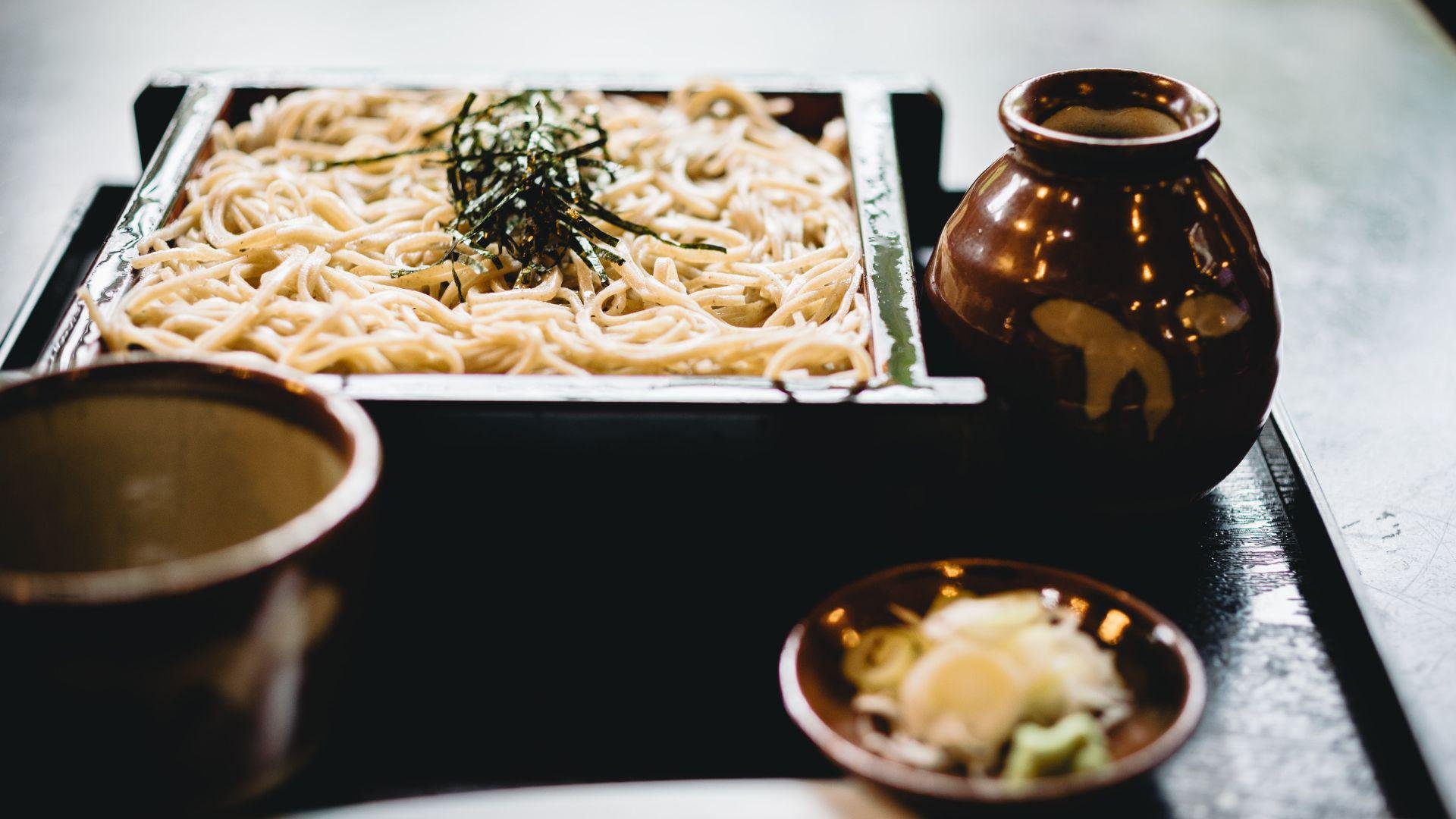 The Ultimate Guide to Japanese Noodles

Noodles are a staple part of Japanese food culture and a key ingredient in many of the country’s most delicious national dishes. There are actually several different types of Japanese noodles, each with their own distinct look, texture, and taste – not to mention all the sub-varieties and regional takes on them. From chilled thin noodles to chewy thick noodles, there’s a style to suit every meal and palate. So get your chopsticks at the ready and let’s start exploring! 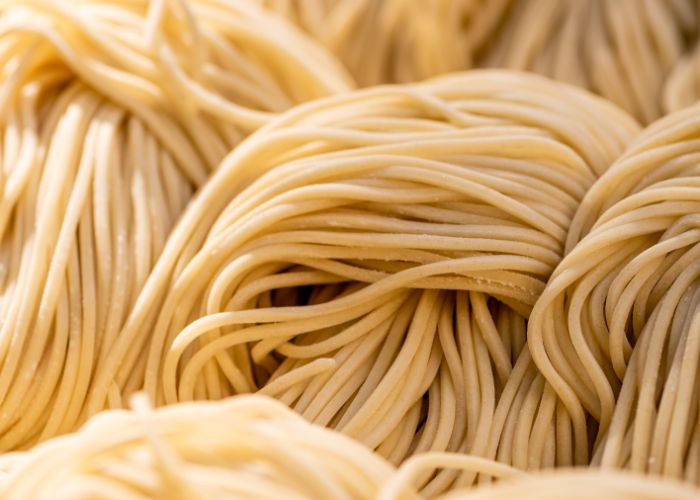 What are Japanese noodles?

Noodles have been a major part of the Japanese diet for hundreds of years, dating back so long that it’s hard to trace their specific origins. It’s thought that most types of Japanese noodles originated in China, but quickly became commonplace after being introduced to Japan. They are generally created from dough which is rolled out and cut into strips, before being cooked in boiling water.

Japanese Noodles are such a versatile food because the dough can be made from all sorts of different ingredients, from buckwheat to rice, and the strips themselves cut into various lengths and thicknesses. Once cooked, they can be served in meals such as soups and stir-fries, or on their own with a dipping sauce. The only limit is the imagination of the chef! 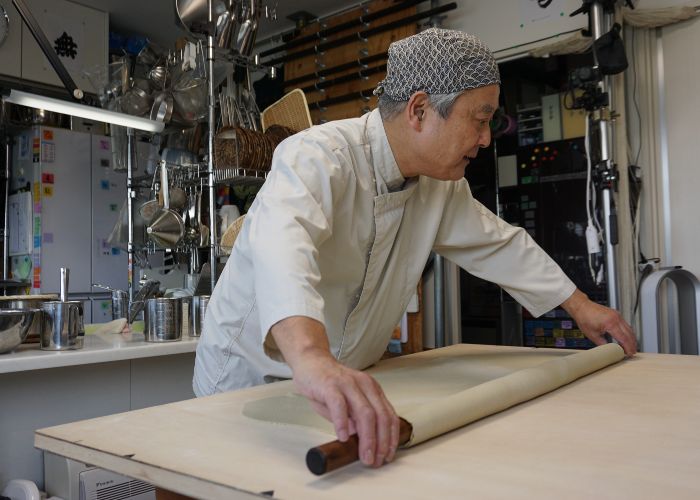 Here we’ll introduce nine of the most common types of Japanese noodles, from famous varieties like ramen to lesser-known but equally delicious styles such as sōmen:

Ramen is perhaps the most iconic of all the different types of Japanese noodles, with whole museums dedicated to it and fans of the dish all around the world. There are many different kinds of Japanese ramen noodles, but they’re generally long, thin and made from wheat. The noodles are typically served in a hot broth loaded with toppings such as egg, seaweed, slices of pork, and local seasonal vegetables. You can also get instant ramen that’s super easy to prepare at home by just adding boiling water.

Japanese udon noodles are the thickest type of Japanese noodles, with a wonderfully chewy texture and characteristic pale white color. They’re made from wheat flour, and can be cut in a flat or rounded shape. While udon noodles are normally served in a hot broth, they can also be enjoyed cold with a dipping sauce. One of the most popular dishes featuring these noodles is kitsune udon, or fox udon, which is topped with abura-age (slices of deep-fried bean curd) – supposedly a fox’s favorite food! 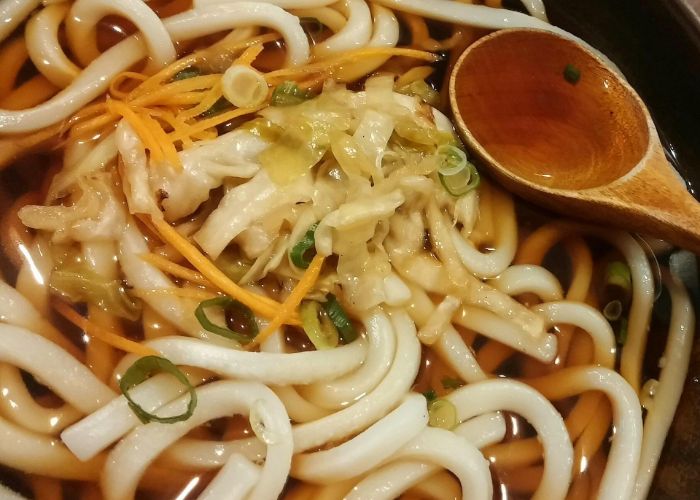 These thin buckwheat noodles can be made either entirely from buckwheat flour – which is ideal for those on a gluten-free diet – or with a mixture of buckwheat flour and white wheat flour. Soba has a characteristically earthy and nutty flavor, with a rustic texture and dark brown color. In addition to being tasty, the many health benefits of soba noodles make them a great choice for a nutritious meal. They’re often served chilled on a bamboo tray with a mentsuyu dipping sauce and garnishes, however on New Year’s Eve it’s customary to slurp them up in a hot soup dish known as toshikoshi soba. 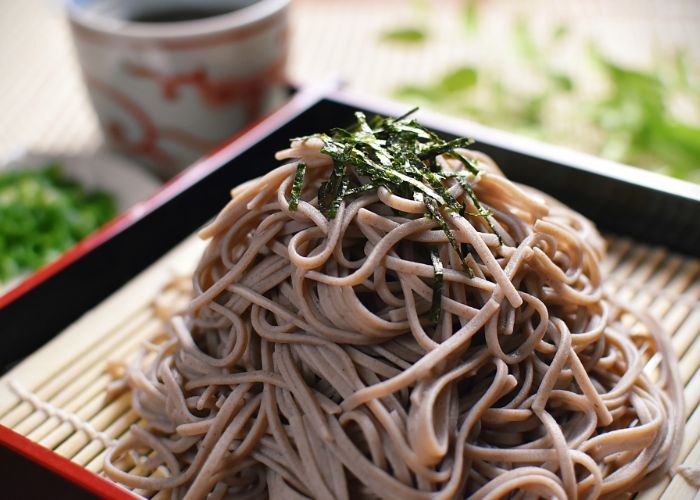 Although you might assume these are also buckwheat noodles, yakisoba are actually wheat noodles. Long and thin, they’re most commonly served in a stir-fry dish along with slices of meat, seafood, and/or vegetables such as beansprouts and cabbage. As such, yakisoba is a popular choice at festivals and street food stalls. You can even enjoy these noodles within a hot dog bun, in a dish known as yakisoba-pan! 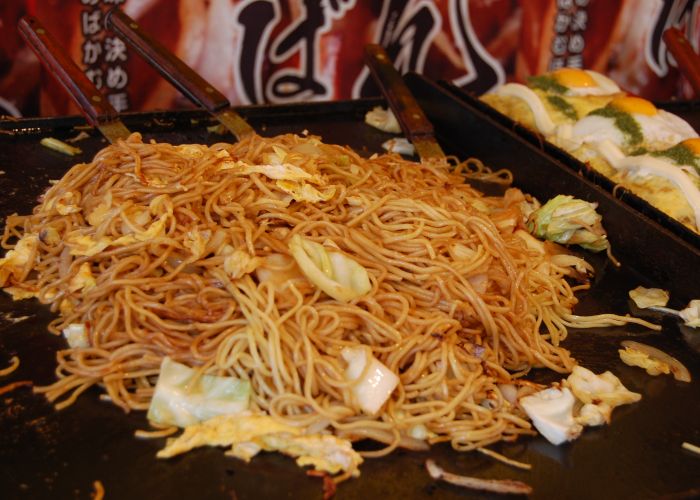 Another form of wheat noodles, sōmen is perfect for a hot summer’s day. Made from stretched dough, so they’re very thin, these noodles have a light texture and are almost always served cold with a tsuyu dipping sauce. One unmissable way to enjoy them is in a style called nagashi-sōmen, or flowing sōmen. This is where the noodles are placed into a bamboo flume in icy water, for diners to pluck out with their chopsticks as they pass by! 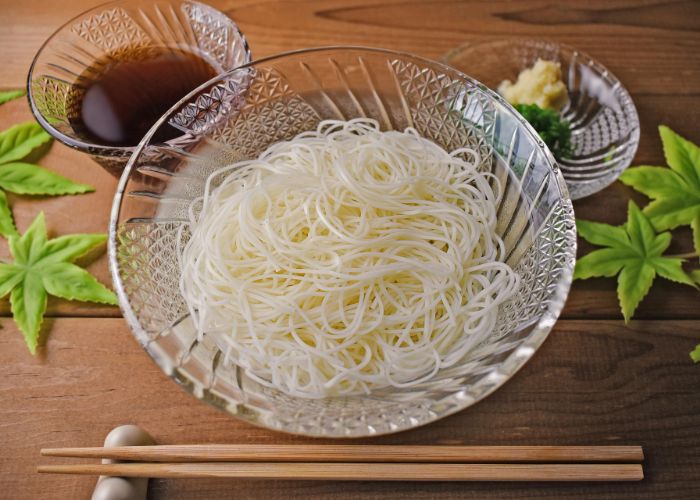 These more uncommon Japanese noodles are created from wheat flour and lie almost exactly between sōmen and udon in terms of thickness. They can be served in a similar way to both varieties, and while most are white you’ll often find some pink and green noodles mixed in with a batch – making for a very photogenic dish! 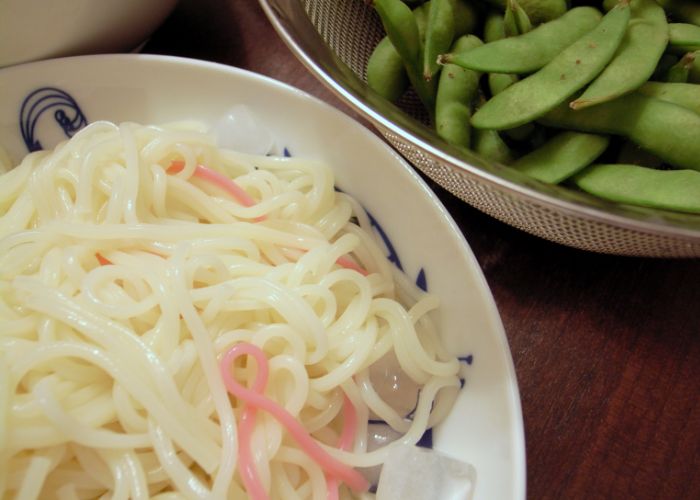 Often called glass noodles thanks to their transparent appearance, harusame refers to thin noodles typically made from mung bean flour or potato starch (meaning they’re also gluten-free). Rather prettily, the name uses the kanji for spring and rain, and they’re a popular addition to soups, stir-fries and salads. 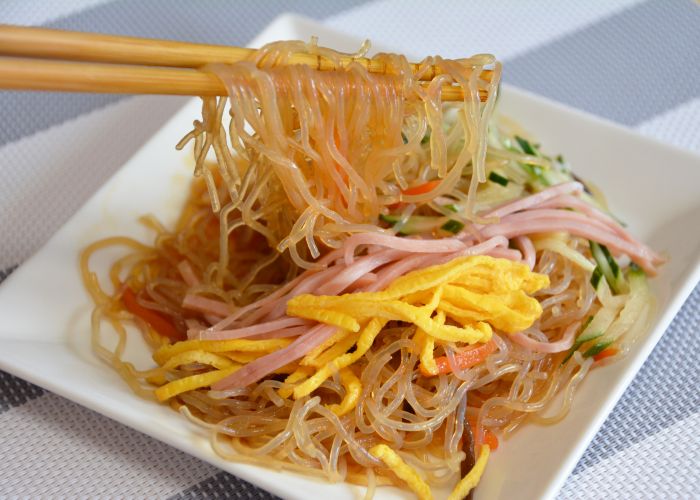 Similar to harusame, shirataki are thin, translucent noodles made from konjac yam. They’ve enjoyed a boom in popularity thanks to the fact that they’re high in fiber and very low in calories. These versatile Japanese noodles have little flavor of their own, so are often used to bulk out dishes such as soups, stews and hot pots. 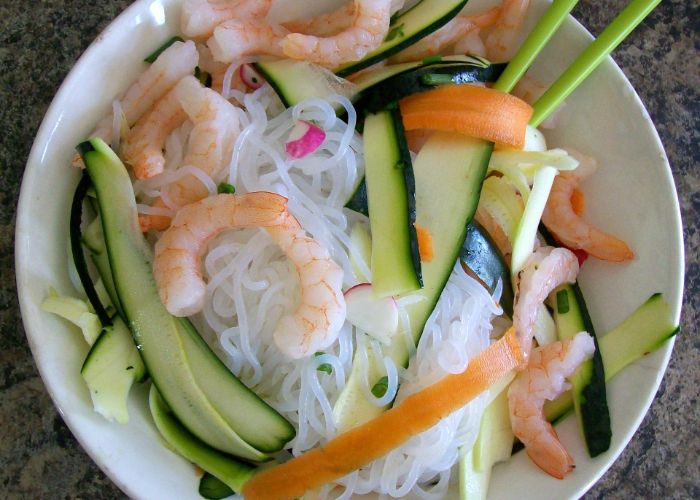 As the name indicates, Japanese rice noodles are made using rice flour rather than wheat flour. They come as both thin noodles and thick noodles and are transparent in color. Another great option for those with a gluten intolerance, the versatility of rice noodles means they can be used in everything from soups to stir-fries. 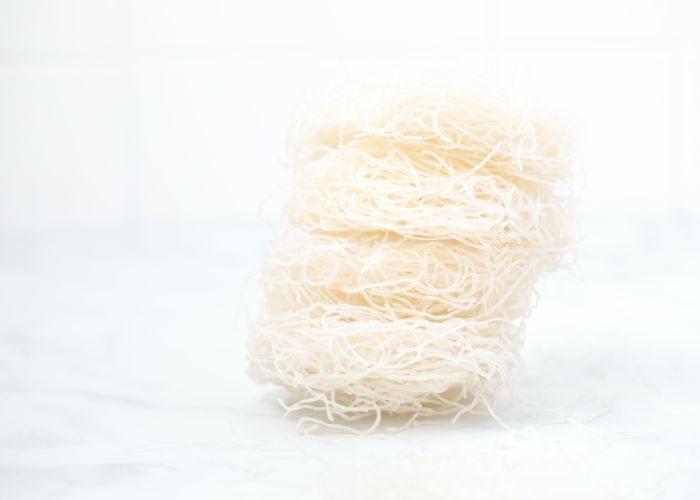 One of the best things about Japanese noodles is how many different regional-specific varieties there are. These include kishimen – a very flat and wide type of noodle from Nagoya – and mimi udon, a New Year’s dish from Tochigi where udon noodles are folded into the shape of an ear. 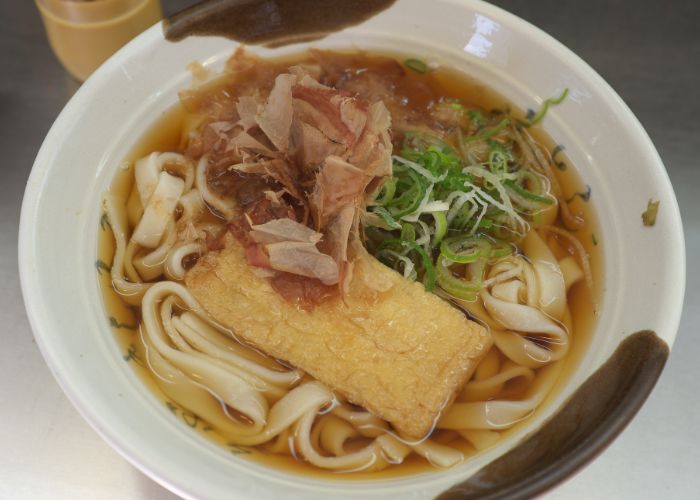 Many areas also put their own spin on the different types of Japanese noodles by serving them with unique local ingredients. For example, Sapporo ramen comes with Hokkaido specialties such as vivid yellow corn and a pat of butter melting into the broth. Meanwhile, Fukuoka’s hakata ramen is made with an especially rich and creamy pork bone broth.

Further sub-varieties of Japanese noodles can be created when other ingredients are mixed into the dough in order to add color and flavor to the finished noodles. My personal favorite is cha soba, where soba noodles are infused with matcha powder, resulting in a deep green color and the subtle taste of tea. Delicious and highly Instagrammable! 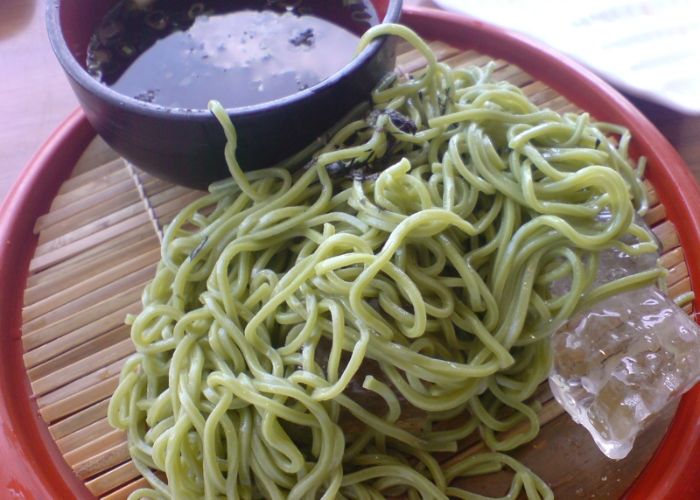 The world of Japanese noodles is wide and wonderful, with all sorts of exciting varieties to tuck into – and innovative new dishes being created all the time. So be sure to try as many as you can, and see which becomes your favorite!