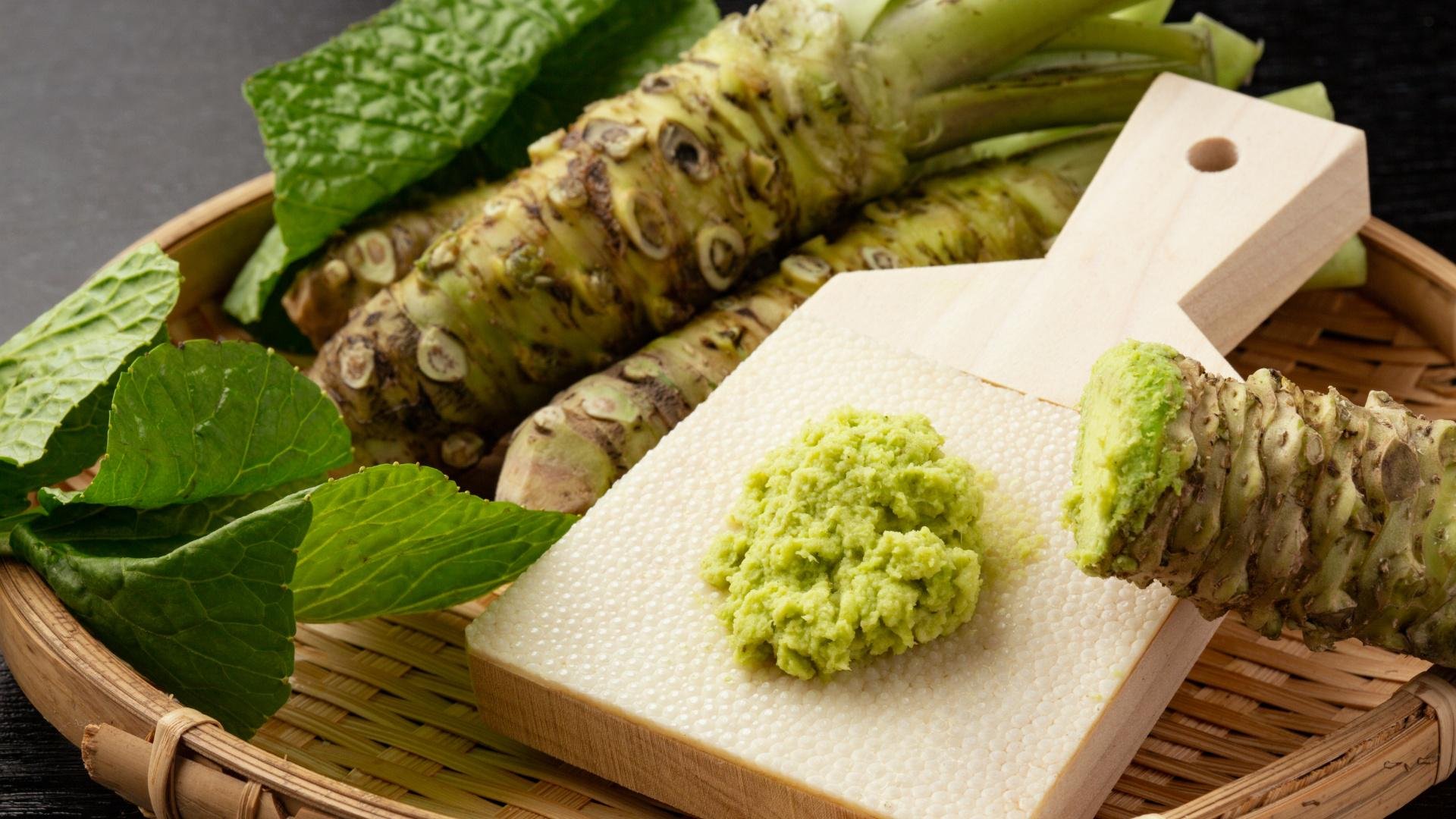 What is Wasabi: Real Wasabi vs. Fake Wasabi & How to Tell the Difference!

When you’ve been to a Japanese restaurant, either at home or in Japan, have you ever wondered what wasabi really is? If you are a fan of Japanese food, chances are you’ve seen it served up as a pale green paste to be paired with pieces of sushi or succulent sashimi slices. It’s distinctly green, zingy, and divisive… but seriously, what is wasabi and how is it made? Here’s everything you need to know about Japanese wasabi, including the difference between real and fake wasabi!

If you're interested in seeing firsthand how this rare plant is grown, join the Wasabi Farm Tour in Tokyo!

So, let’s get into it: really, what is wasabi? Either going by the scientific name of Wasabia japonica or Eutrema japonicum, wasabi is the spicy horseradish condiment from Japan that’s best known as an accompaniment for sushi, sashimi, Japanese noodle dishes (like udon), and more. 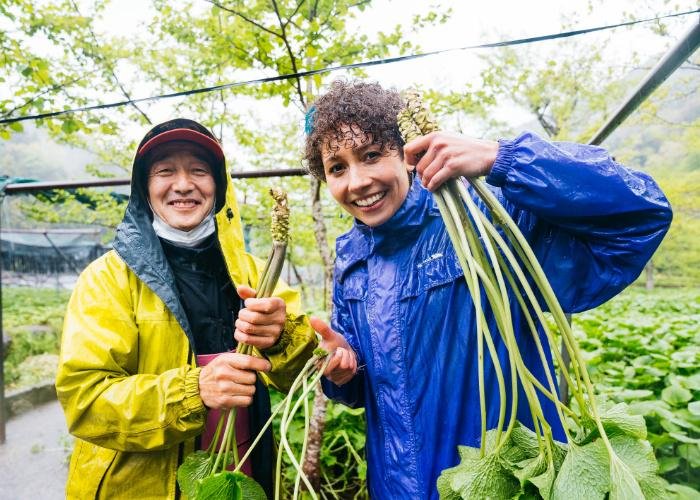 Also known as "Japanese horseradish," real wasabi comes from a plant that belongs to the Brassicaceae family, which typically encompasses other types of radishes, horseradishes, and mustard plants. More like a root vegetable than a spice, real wasabi is made from the rhizome of a wasabi plant, which is the underground stem part of it. This underground stem is grated finely to create real wasabi paste. This is kind of like how ginger can be grated, although a bit less fibrous.

What is the difference between real wasabi and fake wasabi? 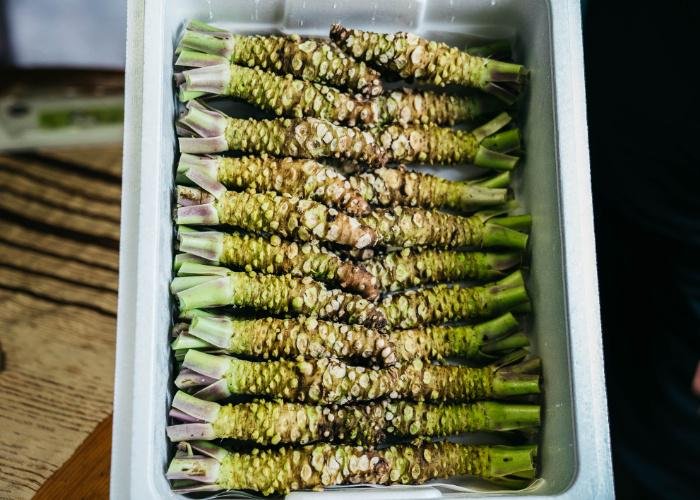 In Japan or Japanese food restaurants, “wasabi” is widely available. But actually, if you think you’ve tried wasabi before, the chances are that in fact, you haven’t! Many people who have only eaten “wasabi” outside of Japan have probably only had imitation or fake wasabi.

In Japanese, hon-wasabi (pictured above) refers to the wasabi plant that is native to Japan, while seiyo-wasabi (pictured below) is the word for horseradish which is from Europe (sometimes also called wasabi-daikon). Japanese native wasabi is the real deal, but being cheaper, European horseradish is used to create powdered fake “wasabi” and other faux wasabi products. Using a low percentage of real wasabi, seiyo-wasabi is dyed green to make fake wasabi as a cheaper alternative. 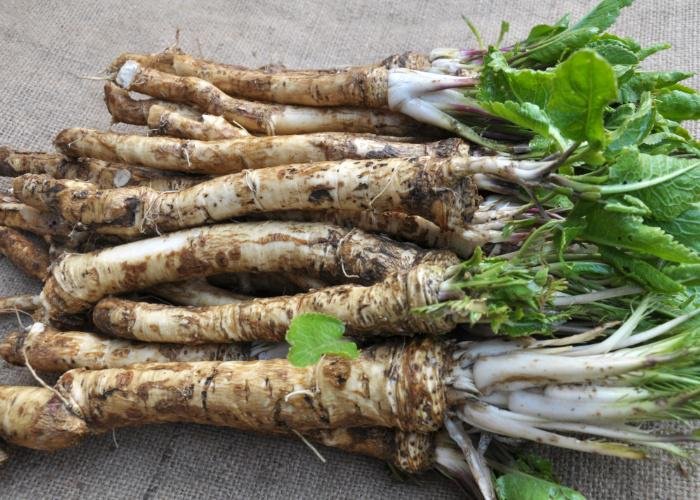 Why is real wasabi so expensive?

As the plant is only native to Japan, wasabi is one of the most expensive crops in the world. This is why a lot of people outside of Japan may have never actually tasted real wasabi before! 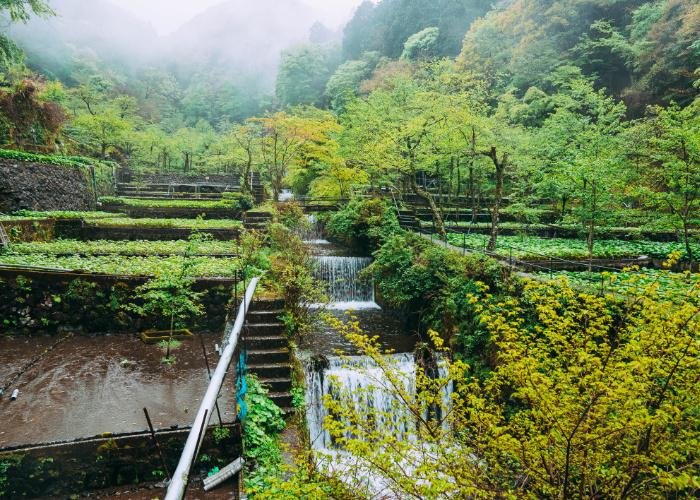 Real wasabi is incredibly expensive because wasabi plants are notoriously difficult to grow and require very specific conditions. In Japan, wasabi is naturally grown in areas that have mountain river valleys where these wasabi plants can grow naturally along the river stream beds. These very specific growing environments are incredibly rare, and wasabi plants need their stems to be partially submerged in running water, adding another level of finickiness to the process. Without running stream beds in Japan’s mountain river valleys, cultivating wasabi plants on a commercial level is very challenging, and thus making it a pricey plant to grow. 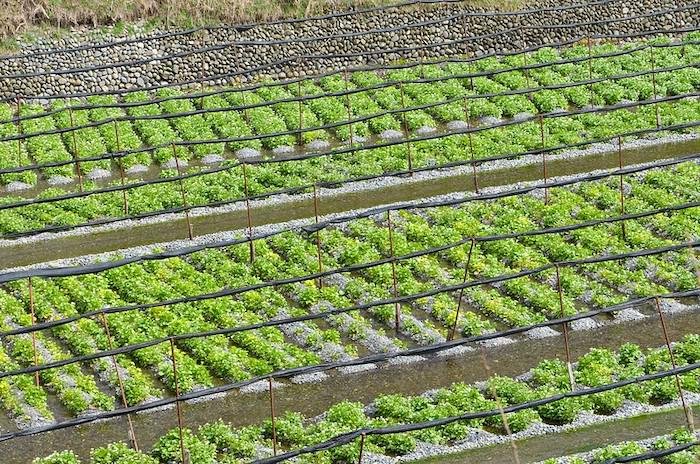 Throughout the country, Nagano Prefecture, Iwate Prefecture, and Shimane Prefecture are known for their local production of wasabi in Japan. However, the Izu Peninsula region in Shizuoka Prefecture is the main wasabi cultivation player, producing around 70% of Japan’s wasabi.

What is wasabi made of? 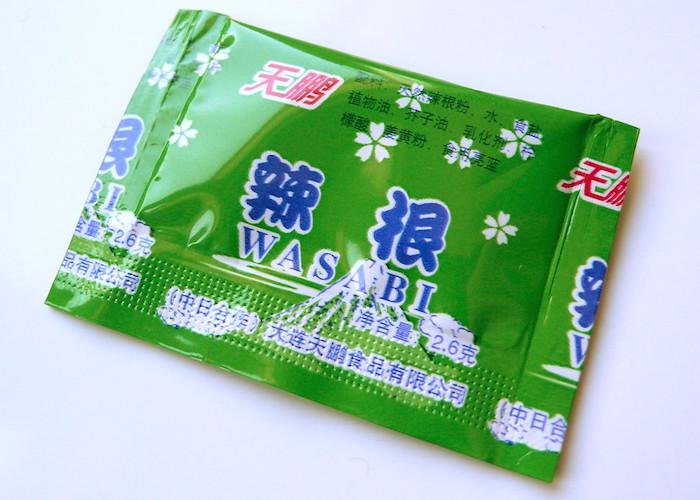 If you’re wondering what is fake wasabi made of, it’s mostly regular seiyo-wasabi in disguise. To make this condiment cheaper and more accessible, many fake wasabi products are widely available in supermarkets or at your local Japanese food restaurant, made from European horseradish.

Imitation wasabi can be found in a paste form (often in a squeezable tube or a small packet) or powder form (this needs to be mixed with water, generally in a little tin). Generally speaking, these fake wasabi products will only have a tiny amount of real wasabi in them, around just 1 to 3 percent. This small amount of hon-wasabi is mixed with colored European horseradish instead to make it more affordable. 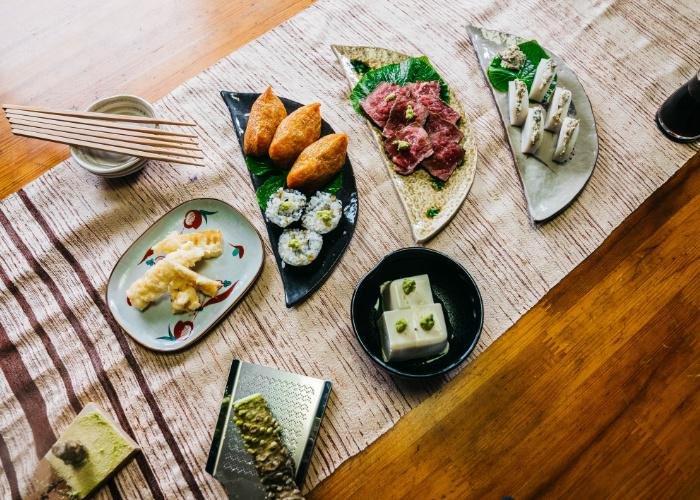 Real wasabi vs. imitation wasabi: What is the flavor of wasabi, and are real and fake wasabi different in taste?

Simply put, the answers are firstly, “spicy,” and secondly, “yes.” Distinctly pungent in flavor, wasabi has a similar taste to hot mustard in that its spiciness hits the nose rather than the tongue like a chili pepper does. True freshly-grated wasabi has a signature “clean” spiciness that is gentle to start but gives a touch of quickly fading heat in your nostrils. Compared with real wasabi, fake wasabi can be zingy too, but not as clean in the mouth.

Why is wasabi so spicy? 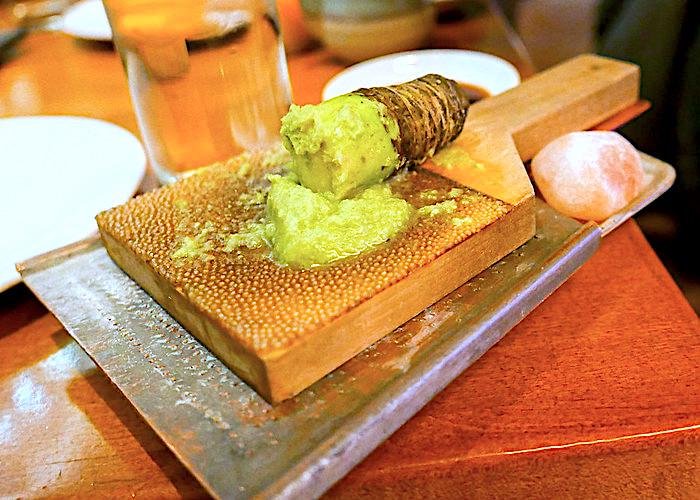 The spicy sensation of wasabi is derived from a chemical compound called allyl isothiocyanate, which is also present in mustard and horseradish. Real wasabi is traditionally prepared by running the root in circles over a flat grater that acts like sandpaper, finely shearing the root down into a fresh paste and unleashing the allyl isothiocyanate, making the wasabi spicy!

In contrast, chili pepper’s type of spice hits the tongue directly and comes from the chemical compound capsaicin. Thus, the spiciness of wasabi tends to go up the nose as opposed to the spice of cayenne or chili pepper.

What are the health benefits of wasabi? 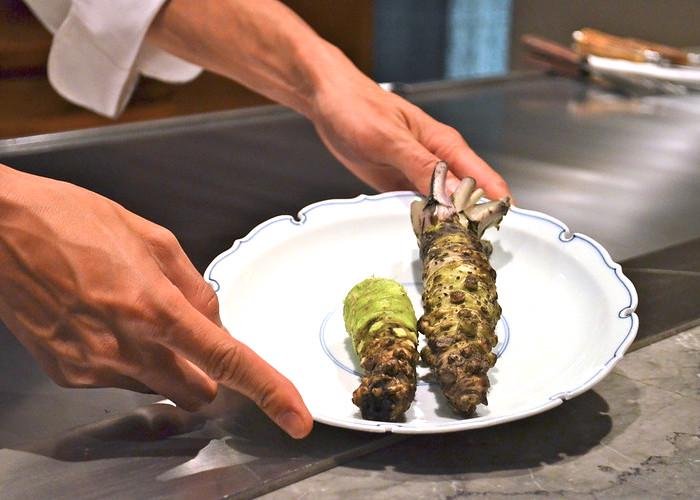 Not only is it a delicious accompaniment to sushi, but hon-wasabi is also full of vitamins and antioxidants, and offers a range of health benefits. Wasabi contains the main class of active compounds called isothiocyanates (ITCs) which give this root vegetable its range of health benefits, including antibacterial and anti-inflammatory properties. Helping to improve the immune system and to remove harmful toxins, it can even kill harmful food-borne bacteria; it’s that powerful!

Health benefits of wasabi include the following:

Pretty neat, right? You must be thinking, “What is wasabi? Some kind of superfood?!” Well, it might have a lot of health benefits, but remember that it comes with a very high price tag. Plus, let’s not forget that these health benefits may only apply when it comes to real wasabi. As only a small amount of hon-wasabi are used in imitation wasabi products, unfortunately, the health benefits are lost if you eat fake wasabi (even if you consume a lot of it).

Am I really eating wasabi? 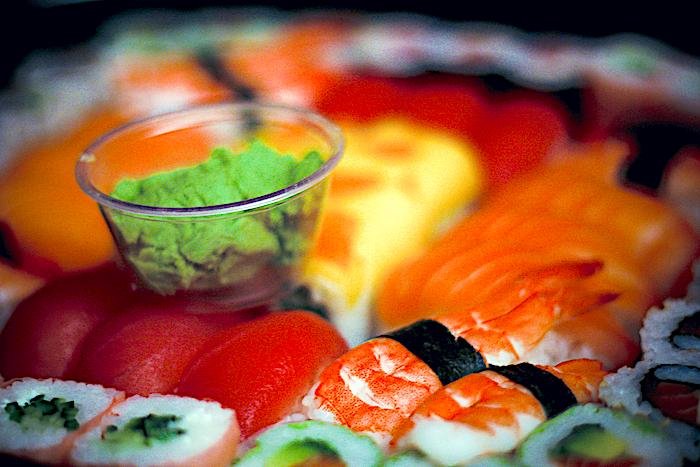 If you are wondering how to tell the difference between real and fake wasabi, firstly check the texture of the wasabi paste. When the wasabi is thick and pasty, that is a sign that it is fake wasabi from horseradish (pureed to give a completely smooth texture). If the consistency is gritty from being freshly grated, then the more likely it is to be true wasabi from a wasabi plant stem.

Real wasabi is always served fresh because it loses its flavor and zinginess quickly once grated. For example, at a high-end sushi restaurant, the chefs will carefully grate the exact amount of wasabi to complement the sushi and balance the flavor of the fish. It is often placed in between the rice and the nigiri sushi topping to preserve it as best as possible.

So, to wrap it up, “What is wasabi?” ...It’s best known as a condiment from Japan from the underground stem of a wasabi plant. Real wasabi is served up in the form of a crushed paste made from finely grating its plant stem. If you were wondering what wasabi is, now you know! The conditions for growing a wasabi plant must be perfect, making it incredibly rare and expensive. Nevertheless, this traditional Japanese condiment is delicious, even if you have to settle for imitation wasabi to get a spicy mustardy kick.

Browse food experiences in Japan and be sure to subscribe to Japan by Food on YouTube for the latest videos!