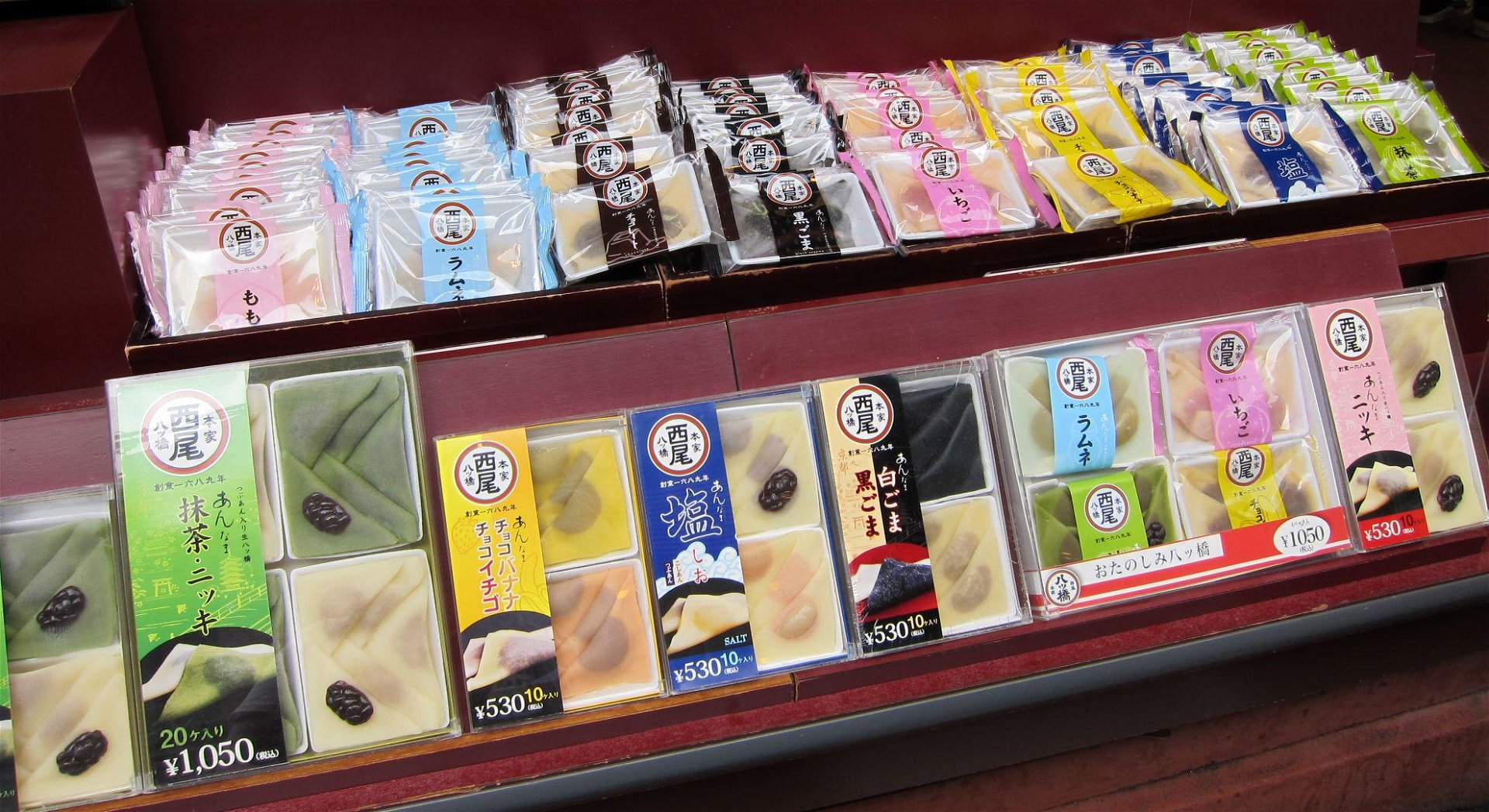 Yatsuhashi are one of Kyoto’s most famous and popular souvenirs, an essential to bring home from any trip to Japan’s cultural capital! Typically made from rice flour, sugar, and cinnamon, these iconic sweets are a special type of Kyoto-style mochi (rice cakes of sweet glutinous rice flour). There are many types of yatsuhashi, such as traditional hard-baked yatsuhashi. Other styles also include raw yatsuhashi, with some featuring different mixes of delicious sweet bean paste folded up into triangular-shaped parcels. 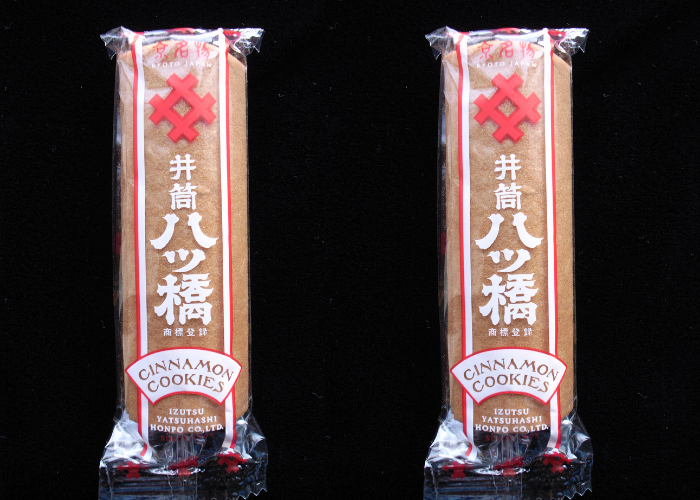 Whichever your favorite, yatsuhashi makes for a perfect bite sized souvenir snack! Keep reading to discover the history of yatsuhashi and why they are such a quintessential souvenir from Kyoto.

Yatsuhashi is a type of wagashi or traditional Japanese sweet that is the most famous regional product from Kyoto. It is made from glutinous rice flour and sugar, typically with nikki (cinnamon) used to give yatsuhashi its signature taste. It’s typically sold as a souvenir for visitors to Kyoto to take home as an omiyage (souvenir). Most people will imagine the triangular-shaped yatsuhashi, but the traditional shape is an arch or a half tube. 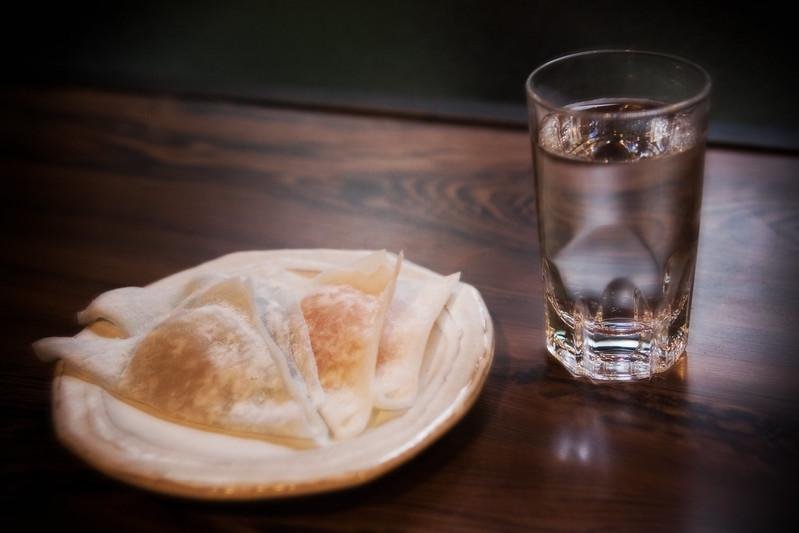 The Origin of Yatsuhashi

Have you ever wondered what Yatsuhashi means in Japanese? There are a number of origin stories of the humble yatsuhashi sweet.

The most widely believed origin story of yatsuhashi is that it was influenced by a blind monk named Yatsuhashi Kengyo in the Edo period of Japan. Yatsuhashi was also a musician and composer credited for inventing the koto, which is a classical Japanese string instrument (aka the Japanese harp). Kengyo was a humble man who was careful with resources and had a goal in life to reduce waste as much as possible. It was believed that he taught others around him not to waste the leftover rice that always sticks to a pot when cooking rice. How to utilize this extra ingredient? Turn it into rice crackers! As the legend goes, a few years following his death, the townsfolk of Kengyo’s village created a sweet (yatsuhashi) in the curved shape of his instrument, the koto, in his honor. 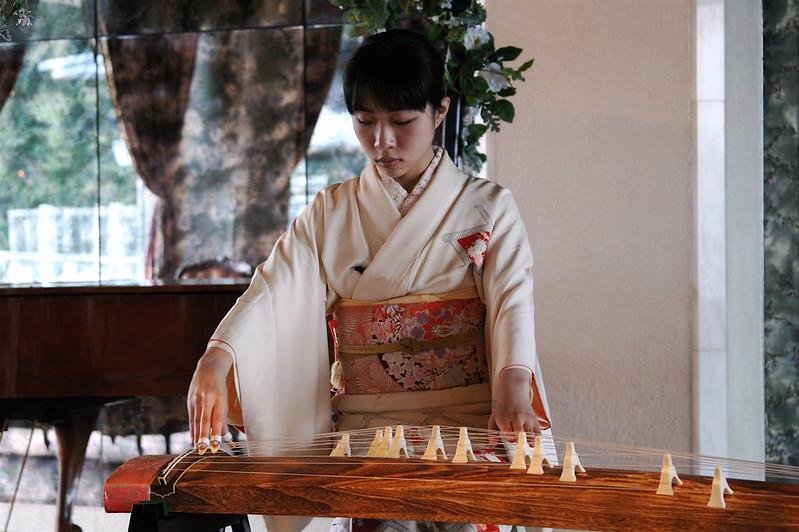 Another origin story of yatsuhashi is that the sweet was inspired by the bridges in the Heian period’s iconic story, Ise Monogatari (The Tales of Ise). In Japanese, the word ‘yatsuhashi’ means ‘eight bridges,’ which refers to a style of Japanese bridge that is made from eight overlapping stone or wooden planks. The first mention of this now-iconic zig-zagging type of bridge was featured in the story. Some believe that a confectioner was inspired by the shape of the Yatsuhashi Bridge, one that is now found in Aichi Prefecture, and decided to create a sweet in this form. This famous style of bridge can now be found in many different art forms as a motif throughout Japan. 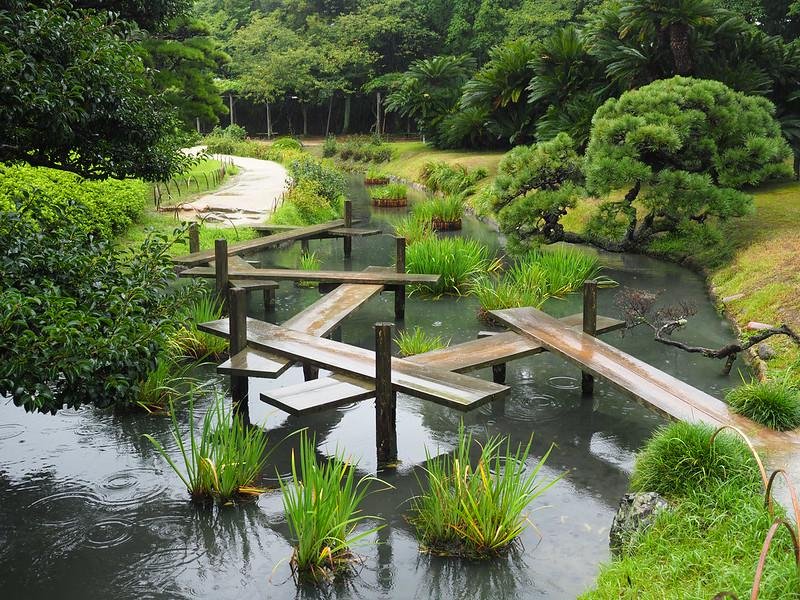 In Kyoto, the two main traditional yatsuhashi producers are Izutsu and Shogoin. As they are both incredibly popular, for years they have warred over the claim to fame for yatsuhashi's prominence. They both have been operating for over 200 and 300 years respectively.

For years, these two stores have argued about who truly is the original maker of yatsuhashi! Supporting the story of musician Yatsuhashi Kengyo and claiming production since 1689, Shogoin believes that the sweet was created outside of Shogoin Temple. On the other hand, Izutsu believes that this can’t be proven and that there is no relation to the koto instrument. They claim that the shape of the yatsuhashi bridge in Aichi must be the true origin story.

The History of Yatsuhashi

Originally, yatsuhashi started out as a standard type of flat-baked senbei rice cracker. It was a bit tough and thinner than you will normally find the soft slabs of cinnamon mochi today. The cooking process also contributes to its curved shape! It is said to have been made by hand since the 1600s.

Historically, yatsuhashi started to become a popular souvenir in the early 1900s. It was said to be sold by merchants to visitors and pilgrims en route to the famous Shogogin, one of Kyoto’s most famous Buddhist temples in the northeast of the city (origins of the ‘Shogoin’ reference). 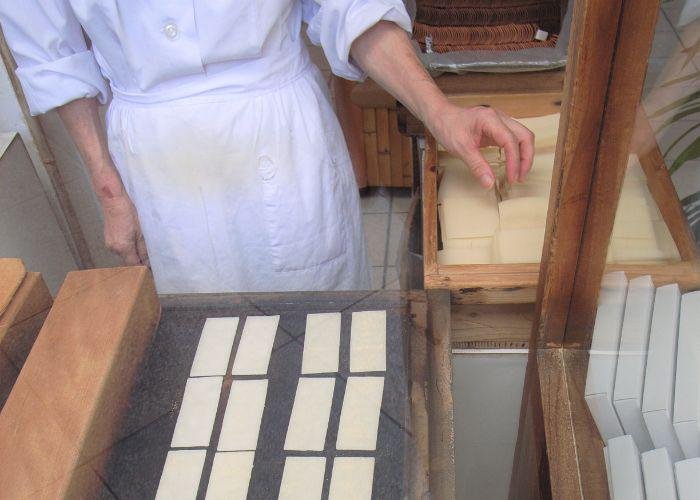 It was also unveiled at the 1889 Paris Exposition. It received a prize and started to gain popularity amongst foreigners visiting Japan as well. The business of yatsuhashi rapidly grew, as vendors took advantage and started to sell more and more to visitors from all over the country outside of Kyoto Station.

Yatsuhashi were originally handmade and baked on a hot plate, however, modern technology leveraged its mass production in the 1970s. The raw style of yatsuhashi grew in the 1960s, and since then many flavors other than cinnamon have been introduced into the mix.

Yatsuhashi now comes in all different colors, flavors, textures, and shapes! With plenty of variety, they traditionally are made in three ways: baked, unbaked, and unbaked with red bean paste as a filling.

The phrase ‘yatsuhashi’ alone is generally associated with the baked style of yatsuhashi, which is the most traditional type of yatsuhashi in Kyoto. This is where mochi dough is flattened and baked until it becomes hard and is tough on your teeth like a crunchy rice cracker. The curved shape is either like a Japanese harp, or a tube of bamboo that is cut in half lengthways. Typically traditional style yatsuhashi pieces are cinnamon flavored, so when you bite into them you get an intense, spiced sensation! 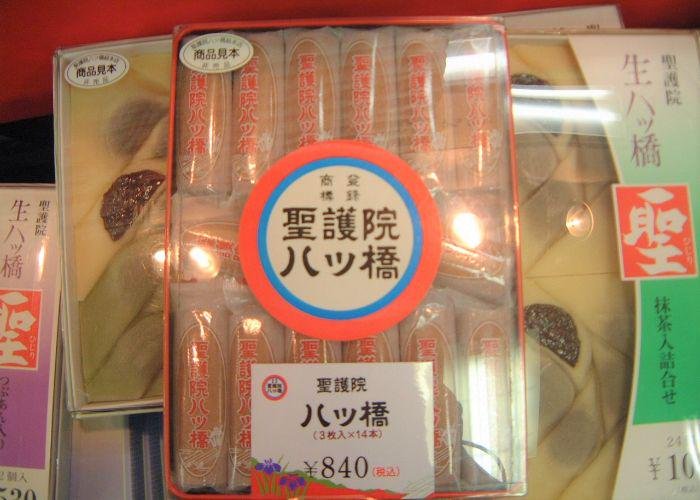 ‘Nama’ means ‘raw’ in Japanese, so ‘Nama Yatsuhashi’ is the phrase for unbaked or raw yatsuhashi. Without being baked, the mochi is steamed and then rolled out to be cut into small rectangular shapes. It is then eaten as it is, enjoyed for its soft and chewy texture. While cinnamon is commonly used for raw yatsuhashi, it can come in many other flavors too!

Raw yatsuhashi with a filling of red bean paste is now the most popular type of yatsuhashi. This is called ‘Aniri Nama Yatsuhashi.’ Again, the mochi is not baked, but steamed and cut into a square. This mochi square is then filled with red bean paste and folded into a neat triangle shape. The sweet red bean paste goes well with the cinnamon mochi, however other flavors are also available. 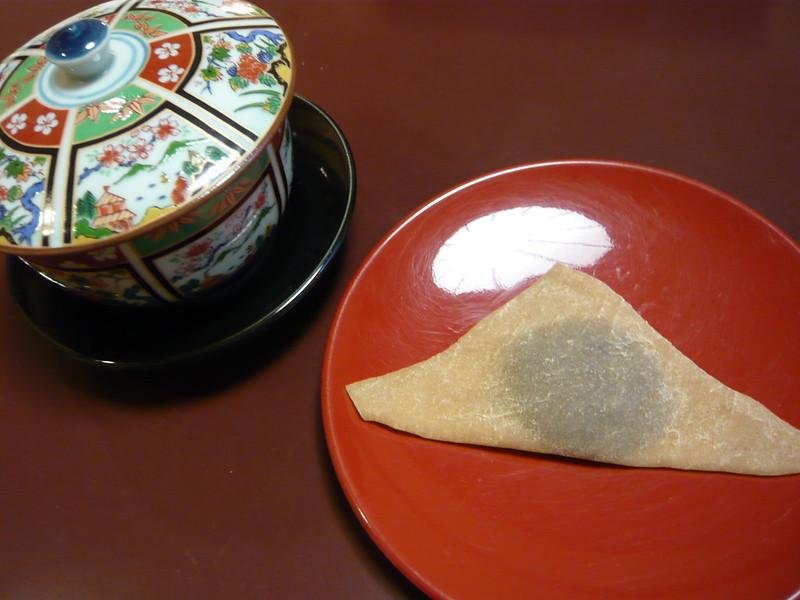 These days, you will find that there are all kinds of flavors besides the classic cinnamon. You will find traditional Japanese filling flavors like matcha green tea or goma (sesame), right through to modern takes like chocolate or seasonal favorites such as sakura! You can sample all sorts of types and flavors whenever you visit a souvenir shop in Kyoto.

How long does yatsuhashi last?

It depends on the type of yatsuhashi. The traditional baked style of yatsuhashi is robust and can be stored for up to three months. This makes them a great souvenir as they last for a long time with an extended shelf life! On the other hand, the raw style of yatsuhashi must be eaten quickly as it will not keep for long periods because generally it is made with fresh ingredients and no preservatives. And besides, it will always be more delicious the sooner you eat it! 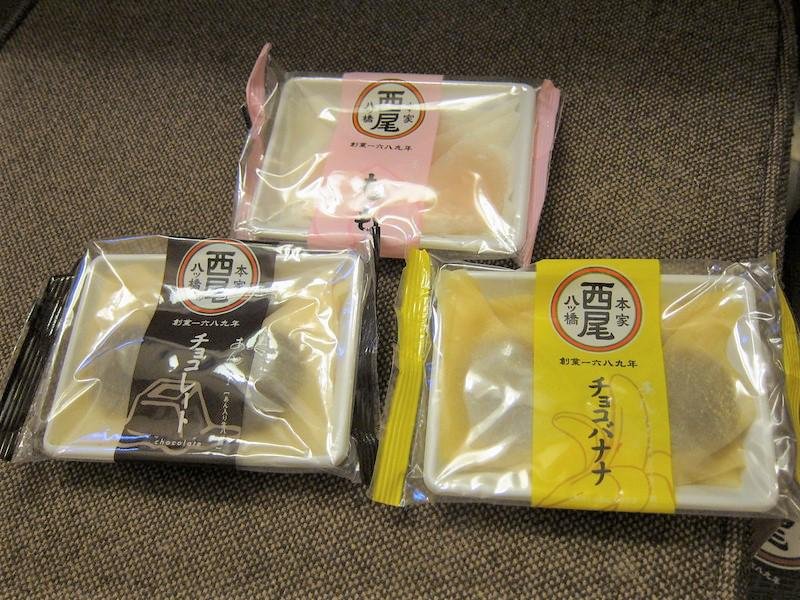 Where to buy yatsuhashi?

Today, yatsuhashi is a very popular sweet in Kyoto that can be found all over the city. Some studies say that up to 50% of local visitors to Kyoto will bring home some yatsuhashi as a souvenir for friends and family! Undoubtedly, they are now almost as famous as the beautiful temples, zen gardens, and local cuisine throughout the city. Yatsuhashi are sold at almost every souvenir shop in Kyoto, and many souvenir shops offer free tastings!

Sanneizaka (or Sannenzaka) is the hillside pedestrian shopping street leading up to one of Kyoto’s most famous temples, Kiyomizudera Temple. There are many souvenir shops along this strip, and stopping to taste yatsuhashi along the way makes the trek a little easier! The Nineizaka (Ninenzaka) shopping street nearby has a lot of charming tea houses and craft stores as well.

You can also visit one of the many souvenir stores and specialty sweet shops in Kyoto’s Downtown area along Shijo Dori Street. Kyoto Station also has a number of shops selling yatsuhashi, to make sure anyone departing on a train doesn’t leave empty-handed!

If you are visiting the cultural capital of Japan, be sure to pick up some yatsuhashi as a souvenir for family and friends. Baked is the most traditional style of yatsuhashi, and the word itself generally refers to this type. These specialty cinnamon-flavored mochi sweets are the perfect treat to bring home from Kyoto, as one of the city’s most famous products.

What to Eat in Kyoto: City of Ten Thousand Shrines

20 of the Best Things to Do in Kyoto, Japan’s Ancient Capital