The Beginner's Guide to Mochi

Deeply tied in the cultural roots of Japan, mochi is a type of rice cake and signature Japanese food that has been around for centuries. A lot of people arrive in Japan and are confronted with these seemingly unusual blobs of rice and wonder, “What on earth is that...?” With its sticky and stretchy texture, mochi is a real curiosity for those who have never tried it. But don’t be wary of mochi; find out all about it here in this ultimate Beginner’s Guide to Mochi!

The umbrella term “mochi” covers all different styles and flavors of Japanese rice cakes, which is a kind of dough made from pounded steamed rice. Eating and making mochi is rooted in many traditions of Japanese culture, and is tied to the significance of rice as Japan’s staple food, with thanks to Shinto gods for providing the harvest. In ancient Japan, it was believed that mochi held a divine presence, so it was regarded as a sacred food that was eaten to pray for health and good fortune. Now eaten all year round, mochi still has long-standing associations with various festivals and seasonal events throughout the year, such as for Japanese New Years celebrations.

On its own, mochi tastes like rice but has a sticky, stretchy, soft, and chewy texture. However, mochi is very versatile with endless flavor possibilities, and is used in a number of different Japanese dishes. Different regions of Japan have different mochi specialties. Mochi is also widely used in home cooking. A typical piece of mochi is a sticky and stretchy rice that has been pounded until smooth and can take on a variety of sweet and savory forms.

How is it Made?

Mochi is made from glutinous, short-grain rice called mochigome (mochi rice), which is known for having a chewier texture than regular rice. Firstly, the mochigome is soaked in water overnight, then it is steamed, and finally mashed and pounded into its soft, sticky state. Making mochi the traditional way involves a mortar and a heavy mallet with at least two people. This pounding of the rice into mochi is called mochitsuki. One person is needed to pound the mochi, and the other person to turn it over and add water to get the right consistency and texture. Mochitsuki is hard work, but now of course there are machines to do this process. However, making mochi together with family and friends is still commonly practiced throughout Japan as a part of celebrating the New Year. A group activity, the collaborative nature of making mochi brings people together.

Once smooth and stretchy, you can eat the mochi immediately. Mochi can be made into small bite-sized pieces and eaten in many ways. Freshly made mochi will become hard over time, so to preserve it, the mochi is wrapped in Japanese paper and then freeze-dried to keep for up to a year. If you grill or boil it, it will return to its original stretchy and chewy consistency.

So, what types of mochi are there and in what kinds of dishes will you find it? Mochi is largely used in many types of wagashi Japanese sweets (lovely when eaten alongside matcha green tea), as well as in many savory Japanese dishes. Here we’ll introduce 15 types of mochi.

Daifuku mochi is a type of mochi that is big, soft, and round, with anko (sweet red bean paste) inside. You can also find other filling variations such as ichigo (strawberry). 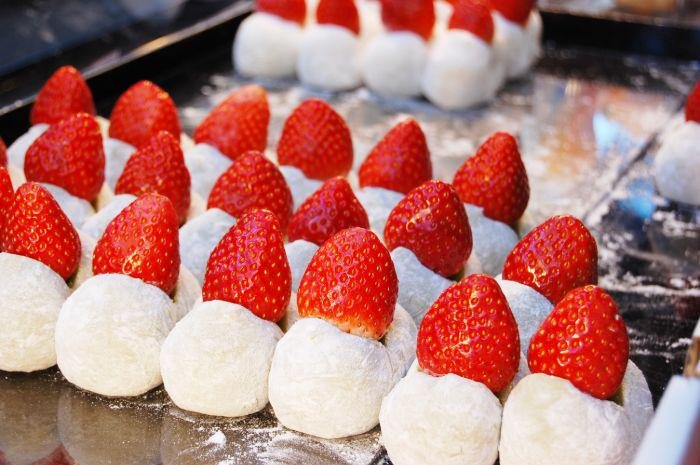 Bota Mochi is like a daifuku turned inside out, where the mochi ball is on the inside and the filling, such as red bean paste, is coated on the outside. Ohagi is another variation of bota mochi that is eaten in the autumn and has a slightly different texture.

This type of mochi is sprinkled in kinoko soybean powder and sugar, and is the best when the mochi is freshly made and warm (also known as, Abekawa Mochi). 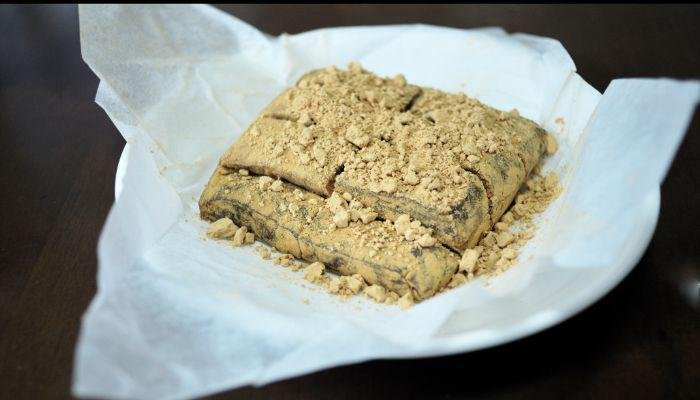 Kiri Mochi describes basic blocks of mochi cut into rectangles in its preserved state. These can be added to various dishes or grilled (see #12). 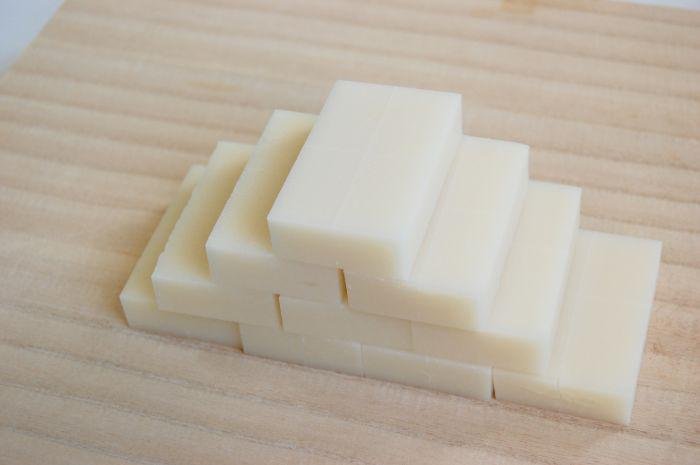 Isobe maki is made of individual pieces of mochi wrapped in a sheet of nori seaweed, and dipped in soy sauce. A simple yet delicious snack, isobe maki is also best when served with warm, fresh mochi.

Made from yomogi (mugwort), this mochi is naturally colored green, and translates to “grass mochi”. It tends to have a leafy fragrance, often with anko red bean paste inside, and is usually sold in the springtime.

This is a triangle shaped mochi that originated in Kyoto. Baked or raw, they come with many possible fillings between thin layers of mochi, however they are typically made with cinnamon. 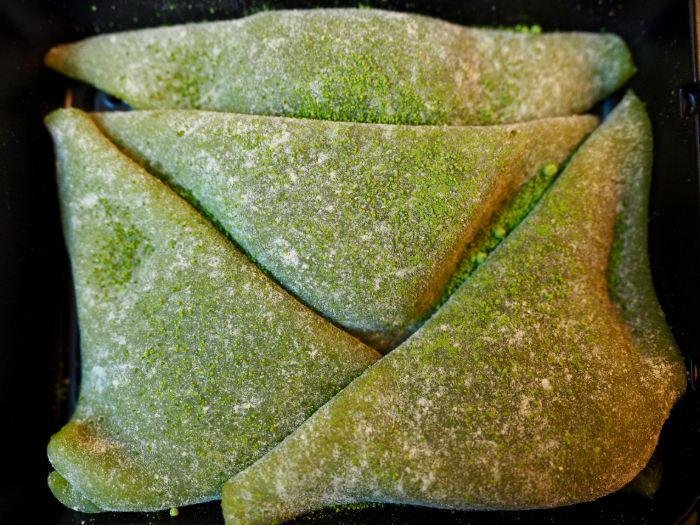 With hanabira translating to “flower petal,” this mochi is in the shape of a flower petal. Usually, a thin layer of translucent white mochi surrounds a red bean and burdock root filling, whose pink color you can see peeking through the mochi.

An extra-sweet pink colored mochi, this one is sold in spring for hanami, cherry blossom viewing season. Usually containing red bean, it is wrapped in a salty sakura blossom leaf which is also edible, contrasting with the sweetness. 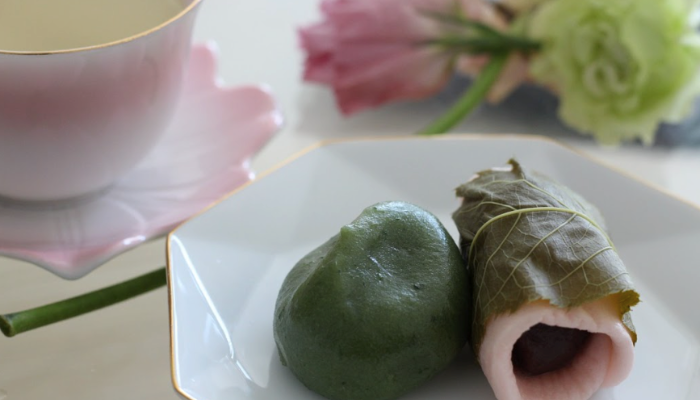 Well, technically dango is not mochi but can fall under the mochi category, as instead of being made from rice, it is made from rice flour. There are many types of dango, but typically you’ll find three to five rice balls on a stick. In the springtime, you will see dango sticks with white, pink and green balls in celebration of hanami. Dango that is drizzled with in sweet soy sauce is called mitarashi dango.

This one is again a little different from mochi, but due to its gooey texture it is also considered a type of mochi. It is made from bracken starch rather than rice powder, giving it a jelly-like consistency. It is eaten in a warm soup, or rolled in kinoko soybean powder.

This type of mochi is toasted over a fire or hot coals, and usually eaten during wintertime. The hard mochi puffs up and becomes soft again as it is heated. Dango is also often eaten this way, called yaki dango. Yaki mochi is another term in Japanese for jealousy. 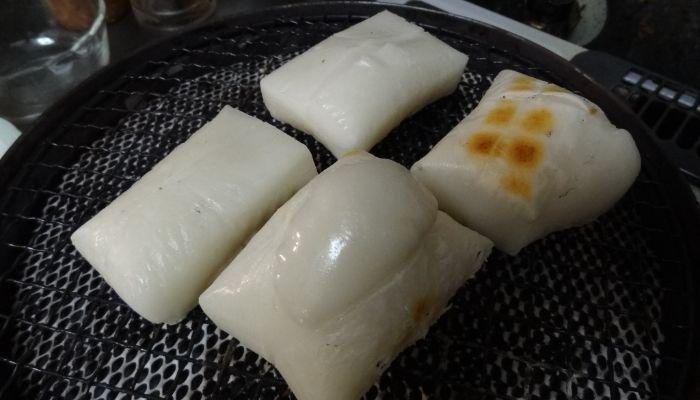 Like daifuku, the ball of mochi is stretched around the outside, but inside there is ice cream! 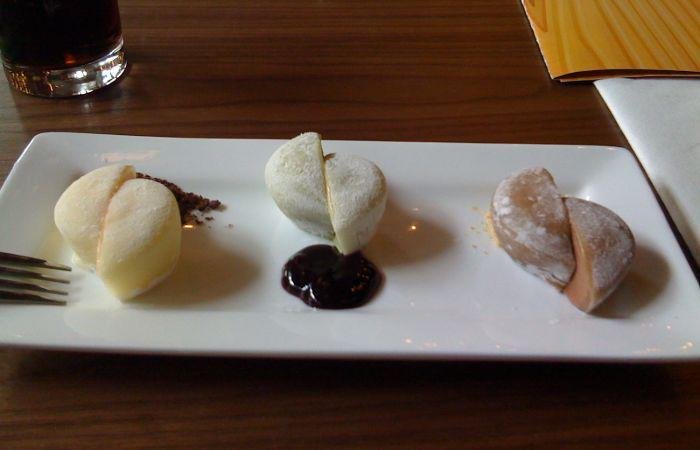 “Hishi” means diamond, and you’ll find these three-layered mochi pieces in the shape of a rhombus. Used as a decorative symbol for fertility, these hishi mochi are sold around the time of Hinamatsuri, or the Girl’s Day festival. This festival, held in Japan on March 3rd, celebrates the success and health of girls.

Kagami, meaning "mirror," refers to the shape of this mochi. Kagami mochi consists of a stack of two pieces of mochi, topped with a citrus fruit. It resembles the shape derived from bronze mirrors used in ancient Japan. An iconic symbol of Japanese New Year, you can see it in December decorating shrines, homes, and offices, as Japanese people pray for long life and a happy year with good fortune.

You can find endless variations of mochi all over Japan throughout convenience stores, supermarkets, department stores, or specialty stores. In cooking, mochi is incorporated into other dishes in a number of different ways. For example, you will typically find balls of mochi as a component of a dessert called anmitsu, which is made of sweet syrup poured over agar jelly, red bean paste, fruits, mochi balls and sometimes ice cream. Shiruko, another popular Japanese style dessert, is a soup made from anko red beans with juicy balls of mochi dropped inside.

For savory dishes, the gooey texture of mochi goes well in okonomiyaki, and also becomes stretchy and delicious when cooked in nabe (hot pot). Chikara udon, or “power udon,” features slices of toasted mochi together with udon noodles, a starchy meal to really fill you up. And, during New Years in Japan, a traditional soup called ozoni is eaten. Despite regional differences, generally, it is made from vegetables, meat or fish and includes pieces of mochi in the broth.

Taking on all kinds of sweet and savory forms, mochi is as diverse as it is curious. With a legacy of hundreds of years in Japan, there are so many styles of mochi to try, even beyond those covered in this guide. This quintessential Japanese food can also be very divisive, with some who love it and some who hate it! But with the over fifteen types covered in this guide to mochi, you are sure to find one type of mochi that pleases your palate. 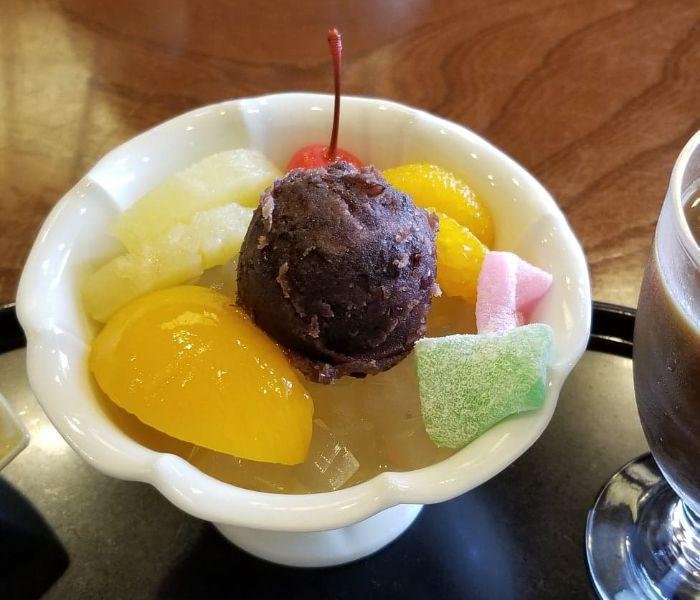 Want to make your own strawberry daifuku mochi and warabi mochi from scratch? Book the Wagashi (Japanese Traditional Sweets) and Mochi Class today!