Although they tend to be outshone by their big brother, the stunning sakura cherry blossoms, Japanese plum blossoms, or “ume,” shouldn’t be overlooked. Of course, the sakura put on a big show across Japan each year and steal the show, which kind of leaves the also stunning ume to be a little under-appreciated, despite it being the opening number to welcome in the spring season. Not to be forgotten, ume are beautiful in their own right, and a delight to be seen in Tokyo and throughout Japan. Let us introduce you to everything you need to know about the Japanese plum blossoms, ume.

A Short History of Ume

Originally introduced from China, ume blossoms have been enjoyed in Japan for centuries. Many varieties have since been cultivated, with blossoms ranging from pale pink to an intense fuchsia. Brought in as an ornamental garden fixture, in the Heian period (794-1185) ume was initially considered the preferred blossom - that is, until sakura came in and stole its thunder as the aristocratic favorite. Ume starts blooming in early February but continues on through until early March, and are a symbol of the beginning of spring and good fortune. With the sakura blossoms surpassing the ume and stealing the hearts of the people, ume has this connotation as being considered second-tier, however it has still retained its good luck status. Quite often the ume trees will have been planted to face northeast, the direction that misfortune comes from, for the purpose to ward off evil.

Ume for Days: When To See Them?

Not to be confused with early blooming sakura blossoms, but the best time to see the ume blossoms is in late February. Although occasionally there is some crossover in the blooming seasons of ume and sakura, ume tends to blossom in cold weather and lose their flowers as the weather warms up. However, with mother nature doing her own thing as always, ume blossoms are infamous for jumping the gun and blooming earlier on in the month, so beware! You'd better bring your winter jacket when going on an ume hunt, as it can be a bit chilly in February but it is a lovely sight to welcome the spring, and brighten up those last days of the winter season. 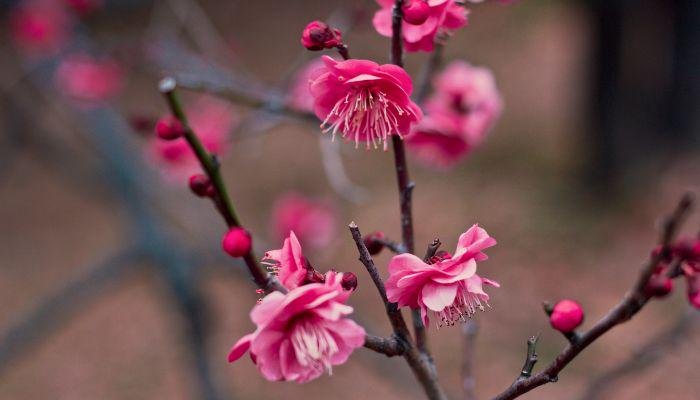 Where to See the Ume?

Although ume is not as in-your-face around the city as you will find the sakura around Tokyo each year, there are many great locations to find some ume blossoms. Generally, you will find them in parks, shrines, temples, gardens, and backyards throughout Tokyo and across Japan as they were spread throughout for their good fortune. One of our favorite spots is Koishikawa Korakuen, a famous garden in the northern Bunkyou Ward, which is a 17th-century landscape garden with elements of Chinese and Japanese design. It has a small but beautiful grove of plum trees, with its own Ume Matsuri plum blossom festival (February 9 - March 3, 2019).

At Hanegi Park in Setagaya, they also host the Setagaya Ume Matsuri (February 10 - March 4, 2019). Quite fittingly in the area of Umegaoka, meaning "ume on a hill," this small park is home to 650 ume blossom trees, making for a spectacular plum festival. Kamedio Tenjin Shrine in the east side Koto Ward is another Shinto shrine with around 200 plum trees. Around the center of Tokyo in the central Minato Ward, you can also find ume at the Imperial Palace East Gardens, Zojoji Temple, and Shiba Park (maybe you’ll be able to get that iconic snap of the ume featuring Tokyo Tower!). Yoyogi Park also has a small handful of ume trees, and if you are in the Harajuku area it is easy to pop by and visit.

Close to Ueno, another popular ume spot is Yushima Tenjin Shrine, which has over 300 plum trees. This Shinto Shrine is for the spirit of Sugawara no Michizane, a Heian period poet, scholar, and politician who was known to have a fondness for plum blossoms. This is a popular shrine for students who come to pray that they can pass their exams. Between early February and early March they also host an Ume Matsuri plum blossom festival here (February 8 - March 8, 2019).

And as a bonus, just an hour away by train, in the Kanagawa Prefecture south of Tokyo, you can see some really beautiful ume at Odawara. You can enjoy ume until early March, and get that juicy shot of Mount Fuji with ume or the historic Odawara Castle in the background. The Odawara Ume Matsuri area features over 35,000 ume trees with a spectacular background of Mount Fuji and the mountains of Hakone.

Is it Ume or Sakura?

When standing underneath some kind of pink, beautifully blossomed tree, figuring out whether or not it is ume or sakura can be quite difficult. Particularly if it’s February or early March, most likely it's not going to be a sakura tree. Look closely at both the blossoms themselves and their trees to tell the difference.

The petals of a plum blossom tend to be more rounded, usually with 5 petals, however, there are other multi-petaled varieties too (known as “yaeume”). In contrast, cherry blossom petals are an oval shape with a small notch at the end. Japanese plum blossoms come in many colors, from pale pink to a deep fuschia. Sakura also can be colored pink, but they tend to be lighter, going from even pale pink to white. In terms of scent, the sakura scent is said to be subtle, if hardly any fragrance, but the ume blossoms have a lovely, strong, sweet scent. Another way to distinguish between them is are the buds of the flowers, whereas ume buds are rounded and then sakura buds are oval shaped. Cherry blossoms have green leaf buds, while on plum blossoms they tend to be red or brown. 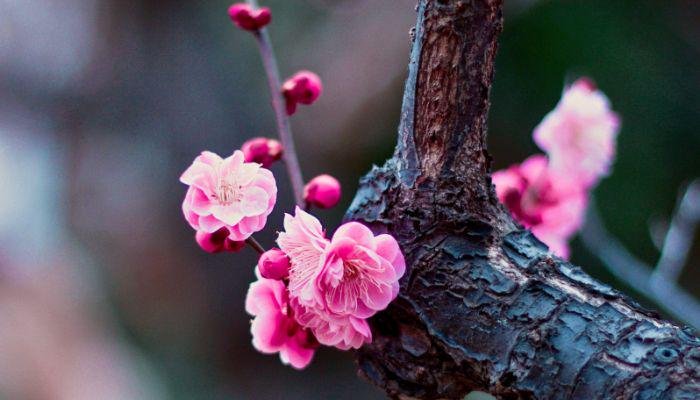 One defining feature of an ume flower is that they tend to have a shorter stem, with one bud per flower growing directly from the wood of the tree. Despite some exceptions of ume with longer stems, generally speaking, the blossoms will be closer to the branches. The sakura blossoms, however, have a longer stem coming out of the branch and with multiple flowers coming out of the same bud. So, in comparison, altogether the blossoms on a sakura free seem more “full” than that of an ume tree, which tends to have fewer flowers per tree. As for the trees themselves, sakura cherry trees tend to have a grey colored bark with horizontal lines and an umbrella shape. An ume tree has darker bark, no stripes, and a rounded or oval shape. However, there are some types of ume trees with weeping branches too, called shidare-ume.

The ume fruit itself, although usually called "Japanese plum" or sometimes, "Japanese apricot," is not like a sweet plum or apricot that you might find in a typical Western supermarket. Rather, it is much more sour and tends to be processed before being eaten. For example, pickling the ume to create a sour pickled plum named umeboshi, is a popular if unusual Japanese food (with a divisive flavor). Umeboshi is popular over cooked rice or in an onigiri rice ball, and you can find all kinds of umeboshi flavored candies and snacks. More sour than sweet, for most people the candies will make your nose wrinkle, but it’s worth a try if you’re feeling adventurous. Other umeboshi flavored snacks are available at a convenience store near you, all year round. 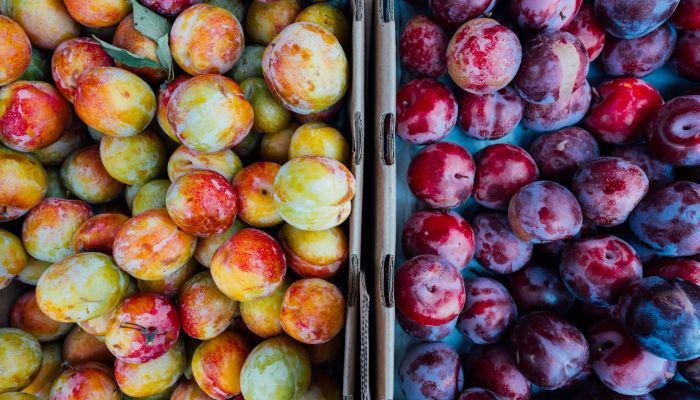 Umeshu is the name for a popular alcoholic liqueur made from the ume fruit, also known as "plum wine." However, it is made with plenty of sugar so it tends to be very sweet, unlike the super-sour pickled umeboshi. A popular drink at a Japanese-style izakaya bar, you can have it on ice (“rokku”), with water (“mizuwari”), or with soda (“soda wari”). Or, enjoy it during a hanami picnic under the canopy of pink and white Japanese plum blossoms. Kanpai!

Although they may look like sakura cherry blossoms, Japanese plum blossoms are different from their overshadowing big brother on the block. Fleeting like the sakura, you can welcome spring with the ume plum blossom between February and early March each year in Tokyo.