Sugamo: What to Eat and Do in the “Harajuku for Old Ladies”

Historical Sugamo is a quaint area located in the neighborhood of Toshima in northern Tokyo, one that’s famous for catering to the elderly population of the city. The centerpiece of Sugamo is Jizo Dori Shopping Street, which is a retro outdoor shopping street that runs northwest of Sugamo Station for a whopping 800 meters.

With an affectionate nickname, Jizo Dori is colloquially known as “Grannies’ Harajuku” or the "Harajuku for Old Ladies.” This comes from the shopping area being reminiscent of Harajuku’s bustling Takeshita Street, but appealing to the grandmas of Tokyo with a more relaxed and nostalgic atmosphere, and history dating back since the Edo period.

When wandering through Sugamo and Jizo Dori, you’ll find street food vendors and local shops selling traditional wares and wagashi sweets (including more mature and conservative fashion on sale). A visit to Sugamo is great for those wanting to get away from busy tourist districts for an afternoon or so in Tokyo. 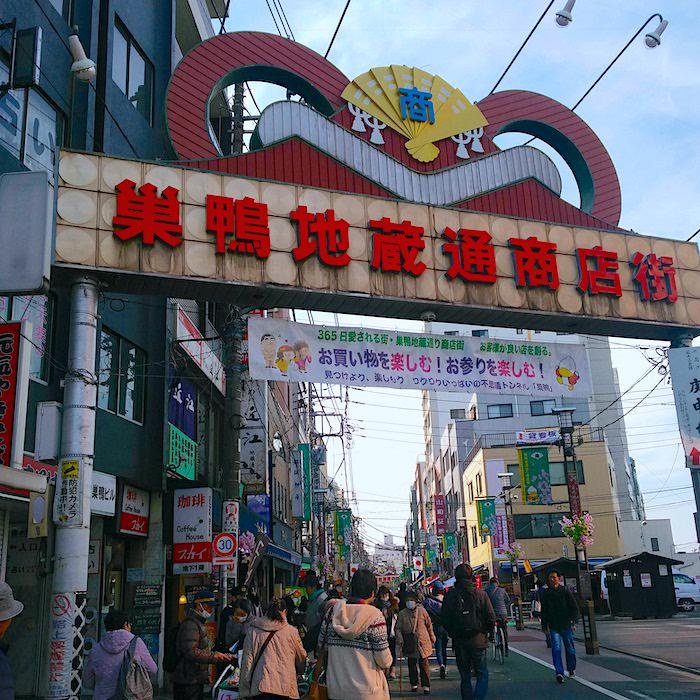 A Brief History of Sugamo

Sugamo has been bustling since the Edo era, with Jizo Dori Shopping Street originally established back in 1903. In fact, its history began as being the first pit stop along the Nakasendo Road, which was the common pilgrimage route from Tokyo to Kyoto during that time. It has since kept its nostalgic feel as one of the older regions in Tokyo, now catering to the oldies of Tokyo (think a demographic of 60+) with traditional street food, local clothing shops, wagashi Japanese sweet vendors, and more. It’s still one of Tokyo’s hidden gems as a neighborhood that’s over 100 years old, but today stores for the younger generation are starting to open up gradually.

Jizo Dori Shopping Street is flat and suitably accessible for all walks of life, but particularly suitable for its elderly shoppers with textured bricks to help prevent slipping. Featuring over 200 shops, Jizo Dori Shopping Street has plenty of clothing stores, traditional goods and street food shops dotted throughout the district. Along Jizo Dori, you’ll find the main attraction is Koganji Temple which is home to the “splinter-removing Buddha,” Togenuki Jizo. A visit to this temple is said to cure all sorts of ailments, and what’s more, it holds regular small-scale festivals on the 4th, 14th, and 24th day of each month! On these days, street vendors fill Jizo Dori and people come to shop and enjoy street food snacks like takoyaki and yakitori.

Things to Do in Sugamo

If you aren’t able to visit Sugamo on a festival day (one with a 4 in the date like the 14th or 24th), there’s plenty of things to do when at this nostalgic meeting place for Tokyo’s Grannies. Here are some of the best things to do in Sugamo or Grandmas’ Harajuku!

If you’re feeling lucky, Maruji is the place to pick up a pair of red underwear, Sugamo’s signature district souvenir that comes in a number of tasteful styles. In Japan, red is the colour of luck and longevity, so these red panties or akapan are meant to bring luck to the person wearing them!

2. Heal Yourself at Koganji Temple 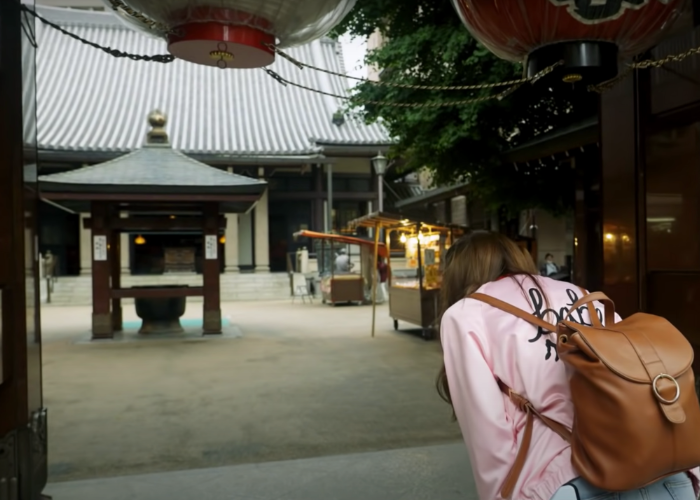 If you’re wandering through Jizo Dori Shopping Street, be sure to stop along the way at Koganji Temple approximately half way down the street. Not only is it the temple for the splinter-removing Buddha, it's known for generally healing ailments. You can put the temple’s incense smoke on areas of your body which are injured, or for 100 yen you can buy an omikage. This is a paper wrap that contains 5 images of the Jizo (Buddha), and you can attach them to parts of your body that you would like to heal, or for a holistic approach, you can eat them.

To add a wonderful blend of traditional food and culture to your Sugamo visit, why not join a Food Tour in Sugamo with Calligraphy Experience? As one of the best things to do in Sugamo, you can taste different snacks and traditional Japanese food dishes at 5 food stops with a local guide, enjoy lunch at a local restaurant, and join a Japanese calligraphy class with an instructor! 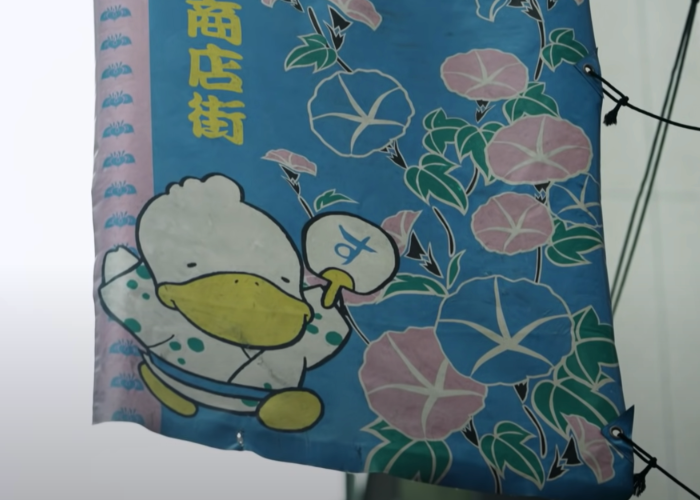 Ever touched a duck's bottom? With its name meaning “duck nest,” the local mascot is a kawaii duck character named Sugamon, who you can see scattered around the area. Along with this cute symbolic character (like everything in Japan), the entrance to Jizo Dori Shopping Street features a big fluffy ball, with a sign reading that it is meant to be Sugamon’s bottom! Touch it, and you will get married, or touch it gently, and that means you won’t need extra help when you become old!

To the eastern side of Sugamo, you will find the traditional and undeniably beautiful Rikugien Gardens. Centred around a specially designed man-made pond and hill, wander through the network of aristocratically designed garden paths for a peaceful immersion in perfectly crafted nature.

Here are some of the must-try street foods when visiting Sugamo in Tokyo! They are definitely worth a taste when wandering through Jizo Dori Shopping Street: 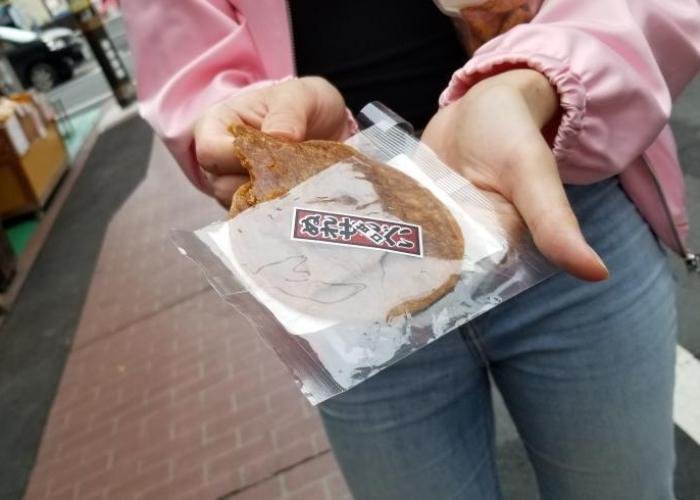 You can buy special local nuresenbei “moist rice crackers” from Raijindo, a local rice cracker specialty shop in Sugamo. Nuresenbei translates to mean “moist rice cracker,” where nure means “moist” and senbei is the word for rice cracker. What’s different about these is that they are soft rice crackers instead of those with the traditional crunchy texture. As they have not been dried or grilled, their texture resembles mochi (pounded rice cakes). Covered in a sweet soy sauce that is not too overpoweringly salty, nuresenbei are chewy and soft, almost like a pancake. 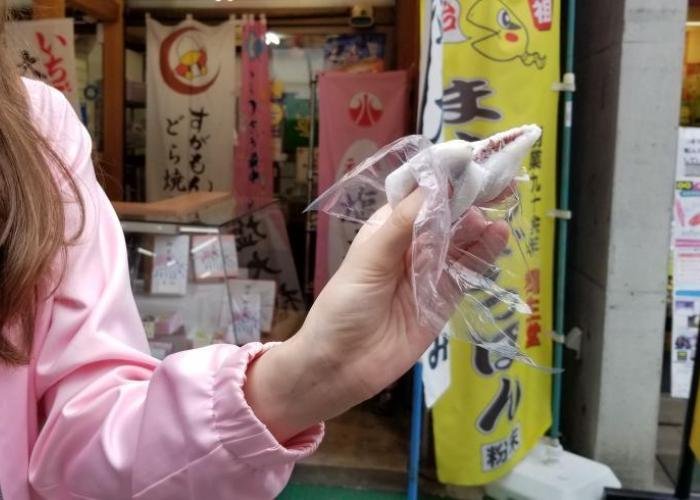 Shio daifuku or salted mochi can be purchased from Mizuno, a small hole-in-the-wall specialist wagashi sweets shop in Sugamo that opened in 1937. Daifuku mochi are typically traditional Japanese sweets made from pounded rice cakes on the outside with red bean paste filling inside. These shio daifuku are extra delicious because the red bean inside is not overly sweet, and the salty flavor sings through the soft and fluffy mochi on the outside. With a cloud-like texture, it is great for those who don’t like their daifuku too sweet! 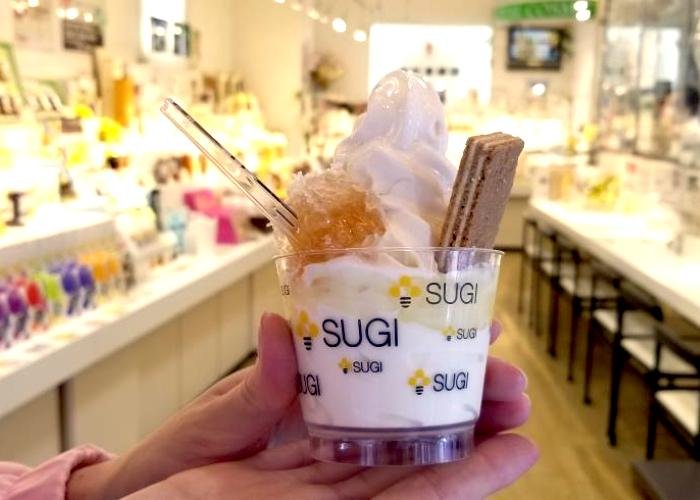 Along Jizo Dori Shopping Street, Sugi is a specialty honey shop in Sugamo where you can try the delicious premium ice cream or “soft cream” that features pieces of honeycomb inside! The icecream is incredibly milky, creamy and delicious, just like a rich Hokkaido milk icecream, plus with the ice cream being generously cup coated in honey. In Japanese, honey is known as hachimitsu. 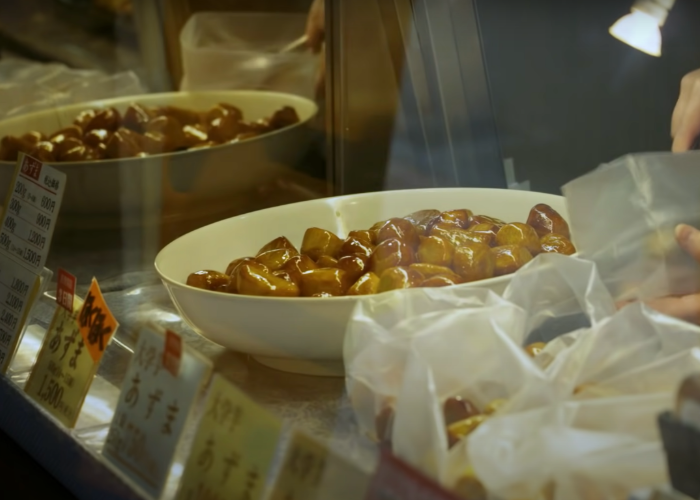 At Koshin Sweet Potatoes, which is an oimoyasan (meaning a “sweet potato shop”), you can taste some local daigakuimo. This street food is candied sweet potato that has been fried and covered in a deliciously sticky and sweet sauce. It is dense and starchy, with a signature firmness to the outside and a sweetness on the coating that is not too overpowering. Daigakuimo from this local Sugamo shop features flecks of black sesame seeds, which balances the sweetness with a hint of savory nuttiness. 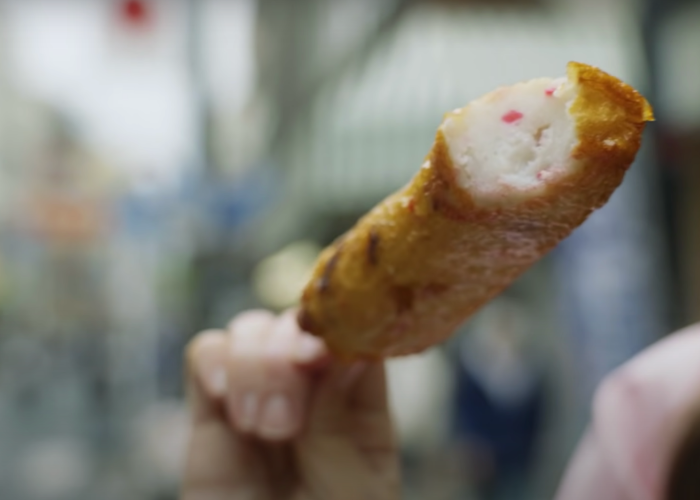 Sugamo’s local store called Isoage Maruten specialises in isoage fish cakes, which are generally fried and topped with nori seaweed. You can purchase isoage on sticks which makes for an easy Sugamo street food to enjoy while wandering through Jizo Dori. Their most popular flavor of isoage are the takobo, or octopus stick. It features pieces of benishoga pink pickled ginger throughout the fishcake, which compliments the savory fishy flavor. They also sell an oozing ebimayobo, which is a fish cake with juicy shrimp pieces inside with mayonnaise! They are chewy like a chikuwa (a Japanese fishcake that is tube shaped and made from ground fish meat) but are warm and easy to eat while walking around. 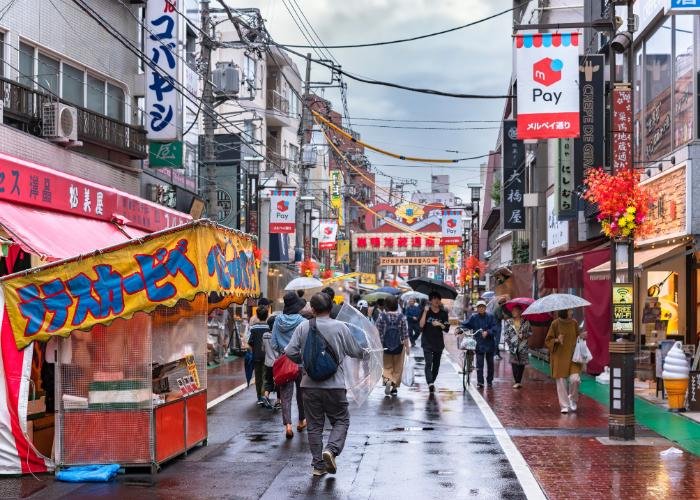 Sugamo is not just the Harajuku equivalent for Tokyo’s elderly population, but it’s full of souvenir shopping opportunities and delicious street food to munch on as you wander through the nostalgic and atmospheric local stores. With a legacy since the Edo period, you’ll find friendly shopkeepers and red panties for luck! A trip down Jizo Dori Shopping Street is perfect for anyone who wants to get away from the tourist areas of Tokyo.

Check out more videos and subscribe to the Japan by Food YouTube channel to keep up with our latest food adventures!