Omurice is a Western-influenced Japanese dish (also known as yoshoku), consisting of ketchup fried rice wrapped in an omelet, and typically, the omurice is topped with more ketchup or sauce. Omu comes from French word omelette, while rice is pronounced raisu in Japanese. During the Meiji Era, Westernization started to influence different aspects of Japanese culture, including food culture. Today, omurice is often a homemade dish that mothers make for their children. It is one of the most popular yoshoku dishes and recalls fond childhood memories. So, if you love eating eggs and fried rice and want to try out diverse types of omurice, don’t miss out the following restaurants with the best omurice in Tokyo!

Some believe that yoshoku culture originated from Rengatei in Ginza. Rengatei, a pioneering restaurant specializing in yoshoku, was established in 1895. Unlike most omurice in Tokyo, their fried rice is not wrapped in an omelet but is instead cooked together with the eggs. It’s a simple dish and it presents the original taste of the ingredients. The simple and classic taste may be the reason why Rengatei has continued to operate for over a century. Come here for the original omurice in Tokyo!

Taimeiken has been established for over 80 years and it takes the lead of bringing Western elements into Japanese dishes. One of their signature dishes is tampopo omurice. Unlike Rengatei's omurice, the omelet is placed on the top of fried rice rather than cooked together with it. Tampopo is the Japanese word for dandelion, so called because the oozy omelet blossoms like a flower when sliced. Tampopo omurice truly is a visual feast.

It only takes you one-minute walk from Nihonbashi station to get there. The first floor is a more casual eatery with more affordable prices, while the second floor is a traditional restaurant. No reservation can be made on the first floor, which means it is unavoidable to wait in a long queue during peak hours. It may take time to wait, but the taste is worth it.

Azabu Shokudo is famous for its perfectly-portioned omurice. Customers can choose demi-glace sauce, white sauce, or tomato sauce, based on their preference. For those who have never tried omurice before, go for the traditional tomato sauce. The ketchup-seasoned fried rice wrapped with a golden omelet is a classic, the acidic taste of tomato sauce complements the rich flavor. The omurice braised with demi-glace sauce carries a strong aroma, creating a harmonious taste together with vegetables and chicken fillings. Meanwhile, it is rare to see omurice in Tokyo coated with white sauce and, surprisingly, the shallot sprinkled on the omelet pairs well with the white sauce.

Want to see how omurice is cooked? Restaurant Azuma has the omurice for you! Their omurice is made fresh in front of customers, and the restaurant allows video-filming so you could capture the cooking technique. You can then try to cook omurice on your own at home. The price (3000 yen) may be high but it’s worth it for someone who is into cooking Japanese food. The chicken fried rice is served in a dolphin shape, covered in gooey scrambled egg, topped with a few green peas, and drizzled with the demi-glace sauce, and it’s done! 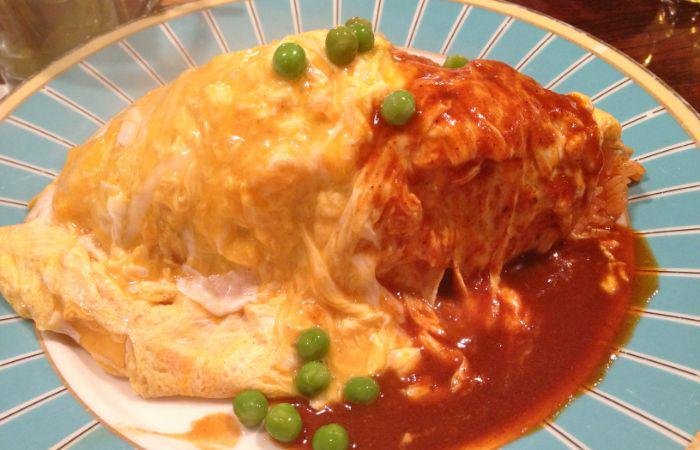 Ailnoir is certainly a new style of omurice in Tokyo. The restaurant emphasizes the use of organic ingredients. The omelet layer of their fuwafuwa (fluffy) omurice is made of foamy beaten egg white, filled with air bubbles. The omurice is then served on a sizzling iron plate. In one bite, you can experience a variety of textures: the half-cooked creamy omelet on the top and a crispy fried egg at the bottom.

@Homecafe is a famous maid cafe located in Akihabara. Some may wonder what’s special about omurice in maid cafes. It’s the classic home-style omurice, infused with moe-culture. Maids will draw cute pictures with ketchup on your "Pipiyo-Piyopiyo Hiyoko-san Rice." Customers can request the maids to draw any characters they like. Before eating the omurice, the maids ask customers to chant the magic words "moe moe kyun" in order to make the food more delicious. You will enjoy an unforgettable experience, an overload of cuteness!

We strive to be as accurate as possible and keep up with the changing landscape of Japan’s food and travel industries. If you spot any inaccuracies, please send a report.
0
Click clap if you like this post
Aleli Dorado
Aleli is a wanderlust whose main itinerary is to culture soak in the places that she sets foot on, sinking her teeth in the gustatory offerings that the place has to offer and knowing the story behind it. Food for her is a marriage of the sights, sounds, smells, and tastes of the rich history of every city she explores and uses the pen as her tool to share to the world each unique experience she unravels.
SEE ALL POSTS
You may also be interested in
Where to Eat